Getting Through Something Hard

The real work on jumping off bridges began after the six weeks of filming, according to producer Stacy Schoolfield. She and writer/director Kat Candler had met with some distributors who thought the film was savvy but not an easy sell.

"It's about real life stuff, and we don't have Tom Cruise," Schoolfield says.

Adds Candler, with a smile: "There's no sex."

But they weren't willing to leave it at that. "A lot of people have put their backs and talent into it," Schoolfield says. "We're not just going to let it sit somewhere."

Schoolfield and Candler decided to embark on a do-it-yourself distribution adventure as STORIE Productions. They scheduled screenings in 20 cities across the country to get a firm grip on the film's audience. So far, amid a favorable response, they've found the most loyalty in grief specialists and counselors who have said that they like the film because the subject of suicide is treated honestly and successfully. In turn, the film was screened in conjunction with National Suicide Prevention Week and will be here with the Travis County Suicide Prevention Coalition. Still, Schoolfield says, "It's not really about a suicide. It's about [teens] getting through something hard."

After the 20-city tour, the duo plans to return to distributors with a definite plan of how the film can be marketed. "It has been incredibly rewarding learning the business, learning the path that a film takes to the theatre, how it gets marketed, how a box office works," Candler says. "I think it's really important for filmmakers to know that they can do this." 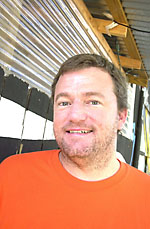