Not all is well in the City, but it's good to be back 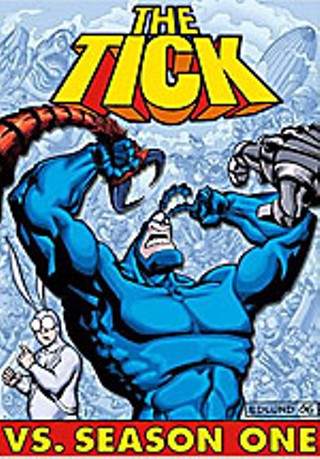 The Tick Vs. Season One

If your ears should happen to be assaulted by hyperexcited voices bellowing the word "Spoon!" at the top of their lungs – and neither Britt Daniel nor Chef Gordon Ramsay are visible in the immediate vicinity – it's a safe bet that you're within earshot of fans of Ben Edlund's muscle-brained, azure-antennaed superhero, the Tick. Give 'em a break: Said fans have been patiently waiting for a dozen years now, engaging in Tick talk and watching the clock while they waited for the animated adventures of the big blue bloodsucker (in name only) to be released on DVD. Well, at long last, the first 12 episodes, which originally ran in 1994 as part of Fox's kiddie lineup, are available for digital viewing on your plasma-screened home entertainment center, and for the most part, they're as much fun as your younger self thought. Though never as manic as the WB's concurrent Freakazoid, nor as self-consciously camp as Adam West's Batman series, the Tick nonetheless nearly always managed to provide a fun and funny program, equally entertaining to children and adults alike as he patrolled the streets of the City fighting evil. His insane over-the-top nature was nicely balanced by the down-to-earth protestations of the Monkees' Micky Dolenz as sidekick Arthur, and the show remains the only Saturday-morning TV series to feature voice work by all four members of the Firesign Theatre. Not all is well, however: This 2-disc set is not only devoid of any notable special features, but many buyers have complained of inferior picture quality; worse yet, despite the title, there's an episode downright missing from the set! ("Venture Bros." creator Chris McCullough, who wrote the absent episode, says the reason for its absence is "unknown ... but undoubtedly litigious in nature.") Still and all, if you like chuckles along with your derring-do, you could do worse than pick The Tick. Hey, there is a second audio track in French. You know that's gotta be funny, right?

South Park: The Complete Eighth Season (Paramount Home Video, $49.99): All 14 episodes from the 1997 season on a 3-disc set. Parker & Stone let loose with both barrels on such deserving targets as Dragonball Z, Mel Gibson's Passion of the Christ, Wal-Mart, Paris Hilton, and a certain pedophilic King of Pop.

Pinky and the Brain: Vol. 1 (Warner Home Video, $44.98): Spun off from Stephen Spielberg's Animaniacs, here's 22 episodes from the Emmy-nominated series about two lab mice plotting to take over the world from their lowly cage at Acme Labs. Available in this set for the first time on DVD.