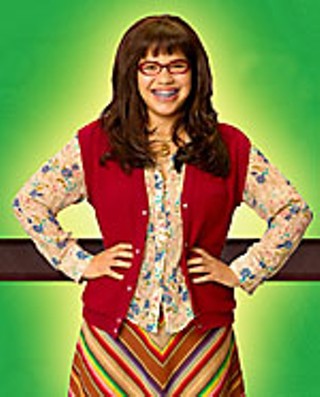 "¡Te aventaste!" is a phrase in Spanish, a compliment meaning"You outdid yourself" or "Well done!" But droll, bicultural nomads sometimes like to utter its literal translation, saying, "You really threw yourself!" It's playful recognition that translation is more than just one word for another and that words are more than their dictionary meaning. Maybe this minilesson in bilingual/bicultural shape-shifting would have been useful to the creators of Ugly Betty, the new series "translated" from its Colombian precursor for a U.S. audience.

Let's start with the title, Ugly Betty. The original title is Yo Soy Betty la Fea, literally meaning, "I am Betty the Ugly." In this iteration, the title is humorous yet empowering in an ironic way. "Ugly Betty" has all the allure of a wet bag of sand. But maybe the show will overcome its unfortunate title, I said to my more bilingual friends. And isn't it good to see another show featuring a Latino on the air? After having seen the first two episodes and hearing that ABC is so confident in this series that it has been moved to the more competitive Thursday-night lineup, I'm left scratching my head.

America Ferrera (Real Women Have Curves) stars in the new series (billed as a comedy) as Betty Suarez, a frumpy, phenomenally style-challenged Latina fresh from Queens Community College who lands an entry-level job at high-fashion magazine Mode. She gets the job when publishing mogul Bradford Meade (Alan Dale) spots her and hires her to assist his son, Daniel (Eric Mabius), newly named Mode editor. Daniel has trouble separating work from pleasure, and the elder Meade believes Betty will keep his son's nose to the grindstone instead of sniffing after eager assistants. Unhappy with his father's intervention, Daniel torments Betty into quitting, but when he discovers his troubles are larger than having a homely assistant and that, in fact, Betty is an ally and not a liability, he and Betty form a respectful, if tentative, alliance.

As in the summer film The Devil Wears Prada, pointed fun is made of the high-fashion industry and its overdeveloped sense of importance. Betty (like Anne Hathaway's Andy Sachs) is smart, earnest, and has a big heart. But if Andy was a fashion disaster, Betty is a massacre, all done up in black contrasted with garish primary colors, glinting braces, a ledge of eyebrows and sensible shoes. Anyone who caught a glimpse of the original telenovela will recognize the unfortunate Betty, but telenovela aesthetics are considerably more melodramatic – visually and performancewise – than here in the states. Therefore, going for a direct, literal translation of the original gives Ugly Betty a buffoonish quality that might amuse children younger than 10 but is off-putting for those who've moved past flatulence humor.

What saves this show from being completely offensive is Ferrera's performance, which thankfully falls short of a Steve Urkel re-enactment. Urkel, if you remember your recent TV history, was the African-American über-nerd portrayed by Jaleel White on Family Matters (1989-1998). Though he garnered loyal fans, Urkel nonetheless elicited an uneasy response from critics who saw the hypernerdy Urkel as a throwback to a minstrel-show caricature. Ferrera's Betty thankfully limits her outrageousness to her fashion sense. Underneath the appalling appearance is a sweet, young woman swimming against the current alongside sharks, blunting their attacks along the way. Yes, she's a hero you can root for, but less would be more in this U.S. interpretation. Leave the high melodrama to the brief snippets of telenovelas re-enacted on the Suarez family TV.

What else is on?

The Bunim/Murray folks come to Austin again, this time to cast for the 19th season of The Real World (MTV). Applicants between the ages of 18 and 24 are invited to strut their stuff on Oct. 1, 10am to 5pm, at Buffalo Billiards, 201 E. Sixth. Bring a recent picture or head shot and a valid ID. Seven new housemates are sought.