Friday-Sunday, as part of Cinematexas 11 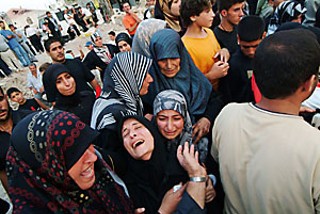 "In attacking the symbols of American finance and American security," film historian Neal Gabler wrote of the 9/11 hijackers some five days after their actions, "it may have been no accident that they chose the language of American movies. They were creating not just terror; they were creating images."

Gabler's words were just cited in Tom Engelhardt's recent article for The Nation, "9/11 in a Movie-Made World." Both recount how, despite the administration's scramble to brand the attacks unthinkable, the populace already possessed a frame of reference. "9/11 arrived on the television screen," Engelhardt writes. "This is why what leapt to mind – and instantaneously filled our papers and TV reporting – was previous screen life, the movies."

In this context, the somewhat-belabored descriptor of Cinematexas' Parallax View series – the Political Economy of Images – makes perfect sense. That hoary cliché of a picture's value in words applies most strongly to the political, where an image's immediacy – cities smoldering from bombings, people stranded on their rooftops amid floodwaters, or the fiery collapse of twin towers – possesses power no words could hold.

That's only, of course, if people see them. Parallax program Apocalypse Nigh: Death and Terror in the Middle East shows the effects of Israeli aggression, something very rarely seen stateside. "Palestine Blues," by video and installation artist Nida Sinnokrot, documents how Israel destroys Palestinian farms and family homes in its path of its illegal security wall. While filled with breathless vérité footage, it's the quiet moments – idyllic trips through citrus groves slated for destruction – that reverberate. Next is Samidoun: A Multimedia Journey Through the 34-Day War in Lebanon and Its Aftermath. Photojournalist Andrew Stern and Democracy Now! correspondent Ana Nogueira cull film, photos, and audio recordings to document the collective punishment that killed more than 1,000 Lebanese while further entrenching Hezbollah.

Domestically, the power of images came to a fore amid the effects of Hurricane Katrina, in the dissonance between futile federal assurances and the reality on the ground. A trilogy of short films compose Remaking New Orleans From Below: "South of Ten," Liza Johnson's fleeting, meditative glimpse of tent cities and cramped trailers; "Cataclysm in New Orleans," which chronicles the uphill struggle to rebuild; and "Solidarity Not Charity," from DIY responders Common Ground Collective. New Orleans native and former Black Panther Robert King Wilkerson will also be on hand to tell of his 32-year wrongful incarceration. There'll be food from Nubian Queen Lola and music from Big Chief Kevin Goodman & the Flaming Arrows.

Parallax's final program, Torture Express: The Rising Cost of "Freedom," sheds light on "extraordinary rendition," the Bush administration practice of flying terrorism suspects overseas to countries for interrogation and torture. In a multimedia barrage, artist and author Trevor Paglen will read excerpts from his forthcoming book, Torture Taxi: On the Trail of the CIA's Rendition Flights, while co-author A.C. Thompson leads the Muckraking for the Masses workshop.

6:30-10pm: Apocalypse Nigh: Death and Terror in the Middle East

1-8pm: Remaking New Orleans From Below