Fantastic Fest II is for real 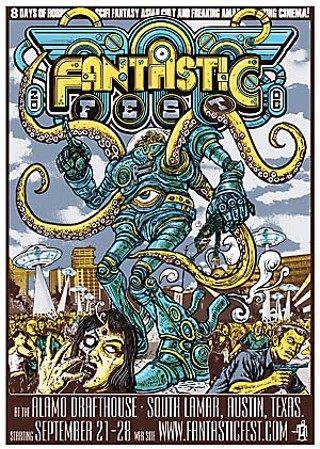 So I'm sitting in my living room last Friday night, lights off, dog on lap, mouthful of Gummi Bears (the squishy Haribo ones from Bonn, not the crap American molar-rapers), and I'm screening a handful of films slated for Alamo Drafthouse Cinema's latest spawn, the second annual Fantastic Fest.

Despite the truly vicious bout of bronchitis I'm wrestling with, one film in particular punches through the Robitussin haze like a pickaxe through an infant's abdomen. It's Wilderness, a UK export that plays like a cross between Lord of the Flies and Dog Soldiers (another UK gut-buster of note, Special Air Service vs. Scottish werewolves). The sequence in question has Brit actor Sean Pertwee (of Dog Soldiers, coincidentally) being savaged by a trio of German shepherds under the command of some nameless, faceless enemy, deep in the piney woods. But that's not what made me cough up a clump of gorey Gummi gobbets and thank God for doggy vacuums; no, that pink-mist expulsion came with what I'm only going to refer to as "the bear-trap shot." I mean, hell. This makes The Descent look like a Nike ad. Jesus.

To say that this year's Fantastic Fest is a monumental, orders-of-magnitude, leapfrog-the-unicorn, severed-head-and-shoulders bypass of Fantastic Fest 2005 is zero hyperbole: 58 feature films, 30 shorts, and enough special guests (including Darren Aronofsky, who'll be premiering his ultra-anticipated The Fountain) to qualify it as fanboy (and -girl) heaven.

So, what's the biggest difference between this year's fest and last year's?

"Volume," cracks Tim League. "Last year we pulled the whole thing off, from concept to execution, in three months. This year, we got going immediately after Fantastic Fest '05 finished. We had a ton of submissions, like 300, and, of course, I took the legitimate, tax-deductible business opportunity to do some traveling to other film festivals.

"And then again, because of the success of last year's fest, we weren't calling cold – people already knew who we were."

In between the gotta-sees and the can't misses (see preview, below) – major works like Terry Gilliam's Tideland, Aronofsky's The Fountain, and William Friedkin's Bug – are dozens of smaller independent outings that range from the romantic to the animated to the slick 'n' sweaty gorehound's delight. Oh, yes, there will be blood (and roses). 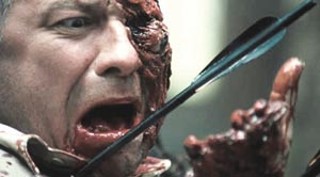 And as much as Fantastic Fest is a by-the-fans, for-the-fans mega-event, this year it's also aiming to become one more of only two North American genre film festivals to be included in the prestigious European film festival roster.

Tim League explains: "One of the things we're specifically trying to do with Fantastic Fest this year is get accreditation from something called the European Fantastic Film Festivals Federation, or Melies, which includes all the big European festivals, like Sitges in Spain, Belgium's Brussels International Festival of Fantastic Film, all of the heavy hitters. There's actually three distinct tiers to Melies, and we're hoping to get in on the third, which comprises like-minded festivals, which are non-European but still try to emulate the Melies model. Fantasia in Montreal and Screamfest in Los Angeles are the only two in North America.

"So, we've applied to Melies; they acknowledged the letter and will consider us for acceptance in the organization – which is a big deal because, you know, they could just as easily ignore it, because there's a lot of festivals in the world – and so now we're flying out a representative from Melies to evaluate the festival and then return to Melies and decide, basically, yes or no."

"And being accredited with Melies," Janisse adds, "really helps festivals bring in movies they might not otherwise have been able to. That hasn't been a real problem for us, just because between the core members of Fantastic Fest, we already have tons of contacts in the industry. But if your festival is part of Melies, it just makes it that much easier."

"What it would really help Fantastic Fest with," Knowles points out, "would be in getting the really cool Asian stuff, because those are the hardest films to get, the ones from Japan, Korea, China."

Considering the success of 2005's initial foray in the Fantastic, accreditation would seem a sure shot. Fingers, however, remain crossed, and the sound of knocking on wood is plainly heard. (Or is that the casket maker next door?)

"One thing that I've noticed," Dentler says, "is that last year, when I would travel to, say, the Toronto International Film Fest, people knew we were doing something down here in Austin, but they weren't really hip to what, exactly, it was. This year, especially in Toronto, there's so much awareness of Fantastic Fest. I would actually have people introduce me as 'Matt from South by Southwest and the Fantastic Fest," which really blew my mind because, you know, last year no one knew who the hell we were. Obviously, we're on people's radar now, and in a big way."

Buzz, hype, and runaway breakthroughs aside, ultimately it all boils down to the films, and you, the filmgoer, sitting in a darkened theatre with 300-plus other devotees of Hollywood's ugly stepchild, the "genre" film. But stepchildren grow up, get smart, and – with any luck – lash out and knock the stuffing out of middlebrow, mainstream mediocrity. And nowhere is this more likely to occur than at events like Fantastic Fest. In the end, it's not about swords 'n' sandals versus bear-traps and viscera; it's about respect, the hard-won, tooth-and-claw kind that Hollywood lost sight of ages ago. And it's about revelations.

Here's to not seeing it coming until it hits you.