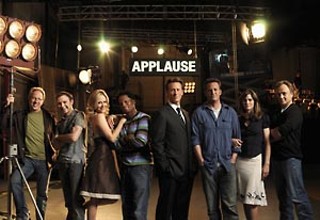 Studio 60 on the Sunset Strip

As TV pundits lament the pros and cons of the serialized drama, several things are startlingly clear about this year's TV season: Comedy is dead; drama lives; and writers – at least for one shining moment – rule. Exhibit A is Studio 60 on the Sunset Strip, premiering Monday. For anyone who knows what it means to invoke Paddy Chayefsky's name or cares about the WGA awards, Studio 60 is a TV connoisseur's dream. With a superb cast, pedigreed producers, and writing as crisp and, OK, "edgy," as everything else promises to be, the series follows the political and personal dramas that drive an SNL-like series from its near meltdown moment to, well, that's what we should discover as the series progresses. (Note: Studio 60 on the Sunset Strip is not to be confused with 30 Rock, the Tina Fey project, set behind the scenes of another SNL-like series, which premieres in October, also on NBC.)

The formidable Aaron Sorkin and Thomas Schlamme (The West Wing) are the creative team behind the series, which accounts for the wealth of talent connected to the project. Matthew Perry and Bradley Whitford shoulder the series, starring as Matt Albie and Danny Tripp: friends, allies, and creative partners who made their mark on the fictional Studio 60 before being fired for "creative differences." In the season opener, they are wrangled into returning to the show when its existing producer (Judd Hirsch as Wes Mendell) goes off about the failure of TV – live and on the air. In real life, the Network-like incident would be giddy entertainment gossip. In Studio 60, the rant serves as the series' hell-raising inciting incident, leading viewers to the aftermath where careers and reputations perilously twist in the fallout.

While comparisons to the famous "I'm mad as hell ..." speech are inevitable, Studio 60's pivotal scene is infused with a dry passion that strikes deep because so much of what is said is true. (Peter Finch's prognosticating speech was set up as an unstable man's breakdown exploited for ratings.) Railing on reality TV, the packaging of the war in Iraq by the news media, the home front battle over free speech, the remote control as a crack pipe, the Mendell speech leaves little untouched. Moreover, the scene comes from the perspective of a writer (Sorkin) who still has deep faith in the medium, seeing it for what it can and should be instead of what it's devolved to.

Hirsch is to be applauded for making the scene undeniably his own. It's almost a shame he is no longer needed in the series (his character is promptly fired). However, the dynamic cast left behind is more than capable. Props go to Perry for leaving behind his Chandler Bing persona. Whitford hasn't quite shed his Josh Lyman tics, but one suspects that in time, they can't help but wear away. Other cast members include a luminous Amanda Peet as a new network president who shepherds the team's re-hire – although it was her supercilious boss (played by Steven Weber) who fired them in the first place. While comedian D.L. Hughley's participation is abbreviated in the series premiere, it's apparent he will have something more to offer in future episodes. His performance also hints at the adage about great writing: It brings out the best in talent. Perhaps the most intriguing character of Studio 60 is Harriet Hayes (Sarah Paulson), a cast member of the fictional Studio 60 who happens to be devoutly and openly Christian. To the series' great credit, Harriet is not a goody-goody lamb or a raving nutcase. Harriet is complicated, opinionated, and not without faults. Her recent breakup with Matt will provide some of the romantic tension on the series, as well as a backdrop for the inevitable clash of ideals the series promises to deliver.

Plainly stated, Studio 60 is brilliant. But will anyone watch? It's doubtful it will draw audiences from its programming rivals, What About Brian (ABC) or CSI: Miami (CBS), but if it draws eyes who have turned their backs on the small screen, its place in TV history may be unparalleled in the long run.