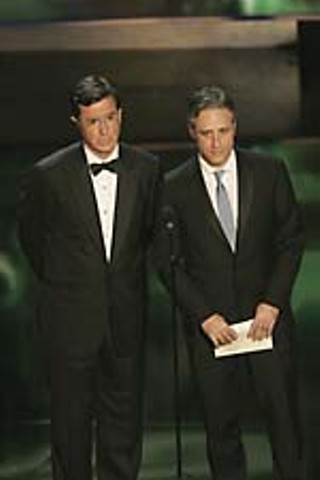 Stephen Colbert and Jon Stewart are not impressed with The Amazing Race.

For all the grousing over this year's Primetime Emmy Awards guidelines, the actual awards show telecast last Sunday had some moments of bliss along with some of weariness. In the bliss column was the almost continuous commentary of TV's struggle to compete with new media. Together with the In Memoriam segment, the praise heaped on Dick Clark (still recovering from a stroke) and an extended tribute to Aaron Spelling (who died earlier this summer) made watching the awards show feel a lot like witnessing an Irish wake. Between moments of levity and optimism were moments of unvarnished anxiety. But hell, the show must go on, and so it did. Here were some of the highs and lows.

Lows: Steve Carell (The Office) losing the Lead Actor trophy to three-time winner Tony Shalhoub (Monk). Ditto for Kyra Sedgwick (The Closer) not getting her due as Lead Actress in a Drama. This year, Mariska Hargitay (Law & Order) finally won after three nominations. Hargitay is certainly likable, but, huh? While Megan Mullally's cohorts from Will & Grace were overlooked in their last year as Emmy contenders, she took the trophy for Supporting Actress in a Comedy Series over the more deserving Jaime Pressly (My Name Is Earl). At least Jeremy Piven (Entourage) finally got his props for Supporting Actor in a Comedy.

Highs: Conan O'Brien as host was affable and edgy, even in the cornball musical number occurring early in the show. His best line was when introducing presenters Stephen Colbert (The Colbert Report) and Jon Stewart (The Daily Show): "The next two have done for fake news what Fox News has done for fake news." This introduction was followed by the best snarky moment of the evening by Colbert and Stewart, who gave the award for Outstanding Reality/Competition Program. Their introduction relied on the creative community's disdain for reality TV, and the audience thoroughly relished their trashing of the genre. It must have been an awkward walk for The Amazing Race crew who won the prize, shutting out American Idol, which was considered the sure win. Even AI judge Simon Cowell appeared nonplussed. Was that a perturbed "Oh my God" read on his lips?

Best snark-hating moment: Cowell introduced to loud boos and sneers. Were those plants hired to help brand him as reality TV's bad boy? If so, those plants were awfully enthusiastic.

Best under-the-radar moment: The Girl in the Café (HBO) took home three well-deserved awards for Made for Television Movie, Outstanding Writing of the same, and Outstanding Supporting Actress in a Miniseries or a Movie to Kelly Macdonald. This exquisite little film was the most blatantly political in content, with strong commentary on the world's haves and have-nots and what one woman did to help even the scales. Ditto for Andre Braugher, taking one home for his lead role in the miniseries Thief. Although Thief received little fanfare, it was good to see Braugher's fine performance – in a series that could easily challenge the regular series nominees – recognized however briefly.

Best "political" statement: Actress Helen Mirren making a plea for more representation of women actors and praise for good writers, when accepting her award for Outstanding Lead Actress in a Miniseries or a Movie for Elizabeth I.

Most sincere display of emotion: Julia Louis-Dreyfus accepting her trophy for Outstanding Lead Actress in a Comedy Series (The New Adventures of Old Christine), along with the well-calibrated tribute to Spelling.

Best running gag: In an effort to keep acceptance speeches short, comedian Bob Newhart was placed in a sealed glass tube with a limited air supply that would run out if the Emmy show ran too long. Erring on the safe side, Newhart was released in time to present an award with O'Brien. Had the gag run to its full potential, Newhart would have played it to the hilt and created some unforgettable water-cooler talk. Oh well, there's always next year.