Not as seen on TV 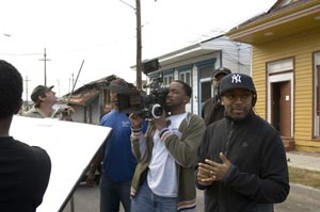 When the Levees Broke

Brevity may not be one of filmmaker Spike Lee's strengths, but his determination to examine every twist and turn of the Hurricane Katrina disaster in HBO's When the Levees Broke: A Requiem in Four Acts is undeniably necessary, painful, and, at times, surprising. Just when you thought you knew all there was to know about the Hurricane Katrina disaster, When the Levees Broke offers another slice of new information. I'm not sure if this could be called the definitive documentary on the subject, but if not, it comes very close.

Calling When the Levees Broke epic nonfiction is most appropriate. Lee offers much more than a sobering look at death and destruction. The history of New Orleans, its culture and traditions, corporate maneuvering, political ineptitude, and plain ignorance, greed, and denial contextualize the Katrina disaster. Because of this, the film – like the disaster itself – becomes a bellwether, confirming what had been suspected but not fully visible: that an underclass is alive and not so well in the U.S. In New Orleans, at least, it seems that underclass is kicking.

Shocked by the enormity of the disaster, but more so by the slow recovery effort, Lee knew this was an event he had to document. Three months following Hurricane Katrina, he and a small crew made the first of eight trips to New Orleans gathering hundreds of interviews and thousands of hours of film. The result is a film offering diverse perspectives on the disaster, from detached professional analyses to anecdotal heartbreaks. Politicians, celebrities, community organizers, artists, and regular folks whose families have made their lives in New Orleans for generations are included in equal measure. While some may complain that the film features too many talking heads, Lee has obviously captured the most articulate sources he could hope to find, each speaking candidly and passionately about what they have seen or experienced. The film plays an important role in capturing a distinctly oral history that mainstream media outlets missed or had neither the time nor the space to capture. The result is an encyclopedic look at the chronology of events before, during, and after the disaster. Most importantly, Lee does not treat Hurricane Katrina as if it were a concrete moment in time, but an ongoing event. The hurricane may have passed, but its economic, psychic, and social aftermath will be felt for years to come. Lee does not let viewers forget this for an instant.

On the brighter side, he offers an illuminating look at the city's rich cultural patois from a decidedly different perspective. Typically, it's the French Quarter that serves as the backdrop for all things New Orleanean. For Lee, the city's town square is smack in the middle of the devastated neighborhoods of the 9th Ward, revitalized with a Mardi Gras parade celebrated with all the soul that is missing in the glossy tourism-bureau representations of Mardi Gras and related events. The film leaves viewers hungry for more of this, but Lee's mission lies elsewhere.

"New Orleans is fighting for its life," Lee has said. "These are not people who will disappear quietly. They're accustomed to hardship and slights, and they'll fight for New Orleans. The film will showcase the struggle for New Orleans by focusing on the profound loss, as well as the indomitable spirit of New Orleaneans."

Acts I and II of When the Levees Broke premiere Monday, Aug. 21, at 8pm. Acts III and IV premiere Aug. 22 at 8pm. The film will be shown in its entirety Tuesday, Aug. 29 (the one-year anniversary of Hurricane Katrina) starting at 7pm. Encore airdates occur through Sept. 10. For more information, check local listings.

Not reviewed at press time: The History Channel offers another view of Hurricane Katrina in the special Katrina: Seven Days in September. This hourlong film examines "the heroic efforts of the U.S. National Guard ... recounting the horror as it unfolded, through the eyes of the troops, detailing the largest rescue effort in the Guard's 369-year history." Katrina: Seven Days in September premieres Tuesday, Aug. 29, at 7pm on the History Channel.

When the Levees Broke:A Requiem in Four Acts