Amid Yahootinis and Freebies, a Focus on the Future 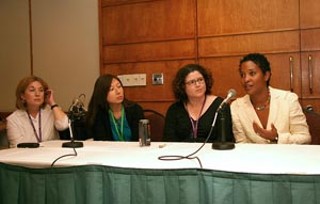 Santana Row is a promenade of high-end retail: Ferragamo, Burberry, Gucci, Oilily. At night, the sidewalks are lined with velvet ropes and beautiful people.

In a room called Fabrizio – as if it were a person and not a place – bloggers are quaffing lemon drops and rooting through a pile of T-shirts in search of size-small swag. None are left by the time I arrive from the Hyatt San Jose in an ad-hoc posse: Photoshop guru Jan Kabili, Mecca Ibrahim (aka "Annie Mole") of the London Underground Tube diary, and IzzyMom, a blogger from Tampa.

The party rolls down the street to an Indian restaurant full of blue neon and breast implants. We misplace Susie Bright during our table wait; she appears minutes later with a cone from the Ben & Jerry's around the corner, which she shares with the group. Plenty of cameras come out when she passes it to Heather Armstrong of Dooce.com.

An elderly man passing by on the sidewalk observes us. "I like your site," he tells Armstrong.

This is the second year of the BlogHer conference, a two-day confab of tech talk, networking, and discussions about blog culture hosted by BlogHer.org, a popular group site for female bloggers. Not all of the attendees are women – the odd "BlogHim" can be seen strolling an infant, running a podcast, or plunking away quietly on a laptop – but women are on top here. The question posed at last year's con – "Where are the women bloggers?" – will be answered amply, with 700 participants packed into the event's second day.

Elisa Camahort, one of BlogHer's three co-founders, doesn't bother to contain her excitement while announcing to the ballroom that we've crashed the hotel's wireless.

The heady smell of estrogen has likewise lured big-ticket sponsors, which could be the surest proof that female bloggers are moving from the margins to the mainstream. Saturday's keynote speech, which features Six Apart's Mena Trott; Arianna Huffington; Caroline Little of WashingtonPost.com and Newsweek Interactive; and blogger Grace Davis, organizer of grassroots organization Hurricane Katrina Direct Relief, is brought to us by Johnson's, which is launching a blog directory for mothers. General Motors has brought its three new Saturn models, which are available outside for test drives, and swag bags of Crabtree & Evelyn body wash and lotion. "To help you relax after a hard day of blogging," the smiling Saturn rep tells me.

The level of sponsorship provides amenities absent from last year's conference, such as child care, a breast-feeding lounge, and cocktail parties with vodka drinks called "Yahootinis." Jory Des Jardins, another BlogHer co-founder, introduces the sponsors of the day's events each morning. "Do hug them if you want," she says.

But not everyone is happy. Some bloggers openly deride the "Be Janes," who are women's home-improvement experts featured on MSN and the portal BeJane.com. They have identical skinny jeans, bouffant hair, and baby tees, and they complete one another's sentences. Their names are Heidi and Eden, but they call one another Jane, a conceit I imagine to be concocted by marketers after extensive focus-group testing and Yahootinis. I'm not surprised they have one name between them: They're like a two-headed booth babe.

"Single women are kicking ass!" Heidi – or perhaps it is Eden? – proclaims during her welcome-session speech. Seventeen million single women in the United States own their homes, and the Janes want them to know they don't have to be afraid to swing a hammer or wire a fixture.

When they ask how many of us are intimidated by home repairs, the CEOs, self-taught geeks, and grassroots activists do not raise many hands. As commendable as the sponsors' efforts to support blogging-women may be, their perky overtures and diet water sometimes miss the mark in a crowd roused to applause by blogging chef Shuna Fish Lydon's remark that food is political and, "We all have to eat no matter how much we make, or the color of our skin."

Women within the BlogHer community do like fashion, style, and humor – the classic components of the daily newspaper's lifestyle pages – and advertisers are taking their page views seriously. Sunday's San Francisco Chronicle heralds the women's blogosphere as the "next marketing frontier" in a piece about the convention, while Microsoft blogger Robert Scoble marveled that women bloggers had "huge economic power and content power that the tech bloggers simply won't touch" due to advertisers' interest in passive-branding campaigns. Blogs and social-networking sites are also seen as viral-marketing gold mines.

The result is a new class of professional and freelance creatives – writers, photo-bloggers, podcasters, video-bloggers – courted by advertisers who want access to the hearts and minds of women at their computers. Women like Dooce.com's Armstrong and conference speaker Arieanna Foley – who has a small media empire of her own with 17 blogs – are examples of this trend. Bloggers who participate in advertising networks or syndicators, such as Bloglines or Austin-based BlogBurst, can make a living at their work if they are popular enough. While newspapers still struggle with the challenges of Web operations, women bloggers take up the question of the opinion writers missing from their pages.

But plenty of bloggers are cautious about the attention. During a breakout session about BlogHer's new advertising network, BlogHer co-founder Lisa Stone encourages bloggers to be wary of "major media companies" aiming to tap the her-blog zeitgeist with $50 contracts for writers. "There are not enough commas in that number," she says flatly. Blogs are intellectual property, Stone says, and bloggers who form business partnerships should be prepared to negotiate their terms instead of leaping at an offer for exposure.

Some outsiders don't seem to recognize the diversity of viewpoints in the women's blogosphere – nor the passion of bloggers' ideological convictions. During the "Let's Talk About Sex" panel, "Web-based woman of pleasure" Melissa Gira takes Web-based Elexa by Trojan spokeswoman Logan Levkoff to task for the company's use of the spermicide nonoxynol-9: "It's essentially a detergent that irritates your cunt." Levkoff, who is more camera-ready but a lot less fun than the other panelists, spins it by informing us that Elexa by Trojan products do not contain nonoxynol-9.

Finally, while I can't name names, around me there is also some mild discomfort about a miniature dot-com bubble bursting in the blogosphere. We could blame the Yahootini, the appetizer buffet we ate for dinner, or the very cute Saturn Sky roadster in the parking lot. But I won't.