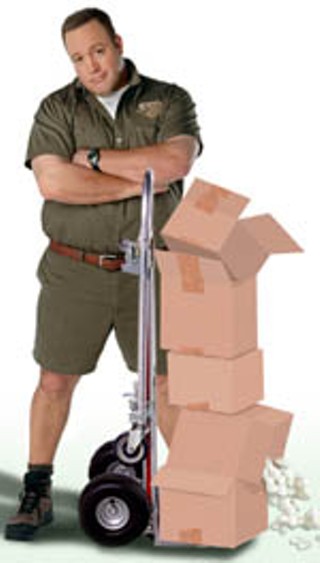 Kevin James is up for an Emmy

I only have two words to say about this year's Primetime Emmy Award nominations, announced last Thursday morning: Kevin James. The King of Queens' James nominated for an Emmy Award? That was peculiar enough, until you realized who was not nominated, at which point befuddlement turned into annoyance. Nothing new when it comes to the Emmys, but there was hope that this year's nominations would be different. Instead, the new system of selecting nominees – using a blue-ribbon panel instead of an open call for nominees – seems to have had the opposite effect. Stick to the same old same old, ignore critically favored series, and reward shows that managed to raise its ratings during the past season (like The King of Queens and Two and a Half Men).

Joining James in the Outstanding Lead Actor in a Comedy category are Larry David, Tony Shalhoub, Steve Carell, and Charlie Sheen. It's great to see Carell here, but where, oh where, is Jason Lee for My Name Is Earl, Jason Bateman for the sadly cancelled Arrested Development, or the superb Ricky Gervais for Extras?

There was one nice surprise in the Outstanding Lead Actor in a Drama category with the inclusion of Denis Leary, who stars as the volatile Tommy Gavin in Rescue Me. Joining him are Christopher Meloni of Law & Order: SVU, Peter Krause, Kiefer Sutherland, and Martin Sheen. Hugh Laurie from House is missing, as were Wentworth Miller from Prison Break and Matthew Fox from Lost.

The nominees in the Outstanding Lead Actress in a Comedy category include two notables: Julia Louis-Dreyfus got a surprising nod for The New Adventures of Old Christine, the future of which was precarious until recently. Joining her is the talented Stockard Channing. Unfortunately, her turn in the now canceled Out of Practice was not nom-worthy. Also on this list are Lisa Kudrow, Jane Kaczmarek, and Debra Messing. Totally shut out are the women from Desperate Housewives and the perennially overlooked Lauren Graham from Gilmore Girls.

Two newcomers joined the Outstanding Lead Actress in a Drama category. Kyra Sedgwick, who stars in The Closer, got her first Emmy nod, as did Geena Davis, who starred in the now-ditched Commander in Chief. Joining them are Mariska Hargitay from Law & Order: SVU, Frances Conroy, and Allison Janney.

Because TV is a writer's medium, I typically look to the writing nominations to support my idea of what the best shows on TV are. For the most part, I was not disappointed. Nominated for Outstanding Writing for a Comedy Series are writers for Arrested Development, Entourage, Extras, My Name Is Earl, and The Office. All worthy contenders, though I still lament the omission of Amy Sherman-Palladino's snappy work for Gilmore Girls and Rob Thomas and company for Veronica Mars.

Outstanding Writing for a Drama Series nods went to Grey's Anatomy (for two scripts), Lost, Six Feet Under, and The Sopranos. I would have preferred to see Rescue Me, Prison Break, or 24, which had a great season, nominated in place of Grey's Anatomy.

It just gets more curious in the best-series categories. Outstanding Drama Series nominees include Grey's Anatomy, House, The Sopranos, 24, and The West Wing. Missing here are Boston Legal and Rescue Me, both of which are superior to Grey's Anatomy. Also missing is Lost, which is perhaps understandable, given the convoluted storyline that made it difficult for even a devoted viewer to follow.

Outstanding Comedy Series nominees include Arrested Development, Curb Your Enthusiasm, The Office, Scrubs, and Two and a Half Men. What? No King of Queens? Seriously, though, what about Everybody Hates Chris, Gilmore Girls, Entourage, Extras, and Desperate Housewives?

Then, there are those hard to classify non-nominees: The ebullient Kristen Bell, who stars in the equally overlooked Veronica Mars (UPN) belongs somewhere, as does the now-canceled Everwood (WB), the family drama which distinguished itself by not being too cloying. I was going to say it got shut out because of its soapy elements, but compared to Grey's Anatomy, which relies on the same, it is high art.

The 58th annual Primetime Emmy Awards will be handed out live, Aug. 27, on NBC.