Ward Serrill on 'The Heart of the Game' 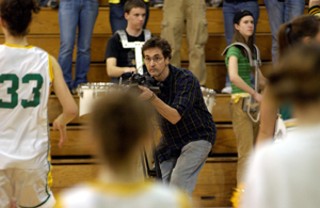 The Heart of the Game opens in Austin on Friday, July 7. For a review and showtimes, see Film Listings.

Aside from the actual basketball, the most remarkable moments in Ward Serrill's seven-year study of the groundbreaking girls' program at Roosevelt High School in Seattle are those that mold the story of a hero without manufacturing one. Though the film and its maker are frank in their admiration of coach Bill Resler as a person, strategist, and motivator, it's what he gets out of his players – think deadly animals stalking helpless prey, and you've got some idea – and gives in return that drives a documentary whose many moving threads are at times more frenetic than the Roughriders' oft-employed full-court press.

Heart of the Game screened at SXSW Film 06, and the Chronicle spoke to Serrill – who, just to get it out of the way, considers Hoop Dreams brilliant and influential, but a "much different doc, darker, with good reason, more social than sport, more somber" – during the festival.

Austin Chronicle: Seven years? Over the course of the film, you have the sense of knowing this program and coach Resler so well, yet it doesn't seem as if you overstayed your welcome, for the audience or for the subjects.

Ward Serrill: Resler loves to tell stories, and I love to listen to stories. To this day, we talk three times a week about his current team and all the things going on with the girls. This has been a hell of a ride for all of us. He doubted for a long time that I'd ever get it done, and I did too. It collapsed about a dozen times; we ran out of money, or there was just no support behind me. And not knowing where the story is: Filming six practices a week, two games; every year, there are new girls. I was lost most of the time, which kept things new. [laughs]

AC: What kind of help did you have in finding those stories? Were you bouncing, not dailies, exactly, but maybe "monthlies" or "yearlies," off of friends or crew?

WS: I couldn't afford to hire anybody else, so I shot it, directed it, wrote it, did sound. ... I didn't even look at most of the footage until four years into it. So, I was stupid. I just kept shooting more and more. I did everything wrong. I just showed up and started shooting. No plan. For a filmmaker, that's the last thing you want to do. It was all on instinct, filming here, following this girl or that girl. I constantly was convinced that I was missing the heart of it, the gist of it. ... I couldn't do the Hoop Dreams thing. The crew all but lived with those families, which is wonderful. I didn't do that. I had to dip into [a subject's] house for a couple of hours, and then I was gone. I had to get the story on my terms, with my resources.

AC: In the film, Resler talked about girls not necessarily wanting to play physically at first, or to make physical contact, and the girls spoke to that a bit. Which makes me wonder what their responses were to you, as a male with a camera, very prevalent in filming some of the most formative years in their lives?

WS: It was easy, primarily because what Resler really does, is he completely allows and encourages all expression of spirit. I could have easily had an R rating on this. They carry on like longshoremen in the locker room. It creates this air of frivolity, and because of that, they are so comfortable just being themselves.

Heart of the Game, Ward Serrill