... and other Austin stories from the L.A. Film Festival 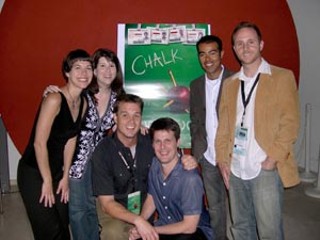 George Lucas was there. Harrison Ford hosted a party. Angelica Huston gave a talk. Even David Lynch made an appearance. Two hundred fifty screenings. Countless celebrity panels. Eleven days of total film gluttony. But as I prepped for last week's Los Angeles Film Festival, I remembered the enigmatic advice from SXSW Producer Matt Dentler: "It's all about the Target Red Room." A space where filmmakers and press could drink endless amounts of vodka, eat organic fruit bars, and lounge around on enormous beanbag chairs, the Target Red Room was basically a pleasure dome with decor stolen off the sets of Barbarella. Though there was truth to Dentler's words (did I mention the gourmet cookies?), ultimately it was all about the movies and the people who made them.

If the LAFF premiere of Austin writer/director Steve Collins' debut feature, Gretchen, was any portent of things to come, the film's life would have ended in Westwood. After more than a hundred walkouts (the result of a 75-minute delay for the scheduled 10pm screening), the debacle wasn't quite over. An hour into the movie, the projector stopped. Long pause. Deep breaths. Antsy audience. It starts again. Exhale. Shit. It's off again. And again. As Collins recalls, "I literally had my head in my hands. You see people with their head in their hands, and it seems like a cliché gesture, but it actually happens when something is going that wrong." Five days later at the swanky awards ceremony (which also honored Charlize Theron with the Spirit of Independence Award), Collins would be grinning from ear to ear, any thoughts of painful gestures no doubt stripped from his memory.

Collins took home the Target Filmmaker Award for Best Narrative Feature. Along with prestige and accolades, the award comes with something a little more practical: Cold hard cash, $50,000's worth. Team Gretchen went crazy at the ceremony. Tears were shed. Mothers were called. By far the largest award at any U.S. film festival, the unrestricted prize is a coveted and highly competitive honor. The festival jury (which included indie golden boy and former Texan David Gordon Green) honored Gretchen for its "distinctive vision and truthfulness to its characters, which makes [the jury] really want to see what the director will do next." I'll second that. Gretchen follows the story of its painfully awkward title character, stuck in the most unforgiving place on earth: high school. Starring Texan Courtney Davis, Collins' first feature is a humorously deadpan yet poignant reminder of how the smallest moments can lead to extreme adolescent drama. Full of comic brilliance and heartfelt performances, the screenplay for Gretchen was written for a class while Collins was still a grad student in Radio-Television-Film at the University of Texas. Produced locally, the film showcases an amazing cross section of Austin actors and technicians, with additional standout performances from Becky Ann Baker (Freaks and Geeks) and the great Stephen Root. 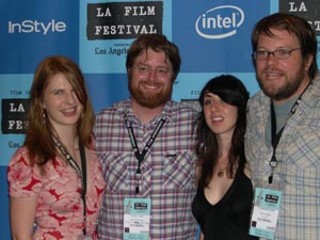 Other longtime Austinites co-writer/star Chris Mass and co-writer/director Mike Akel received the award for Most Outstanding Performance by an Actor or Ensemble for their first feature, Chalk. Its two screenings had such prefestival buzz that a third was added. Akel was present with nearly 20 members of the cast and crew, almost all from Austin. Following three novice teachers and one assistant principal as they navigate a year of high school, Chalk showcases Akel's brilliant comedic directing, as well as the insightful and hilarious performances of his actors. Manipulating a doc style, the film provides a rare and realistic teacher's perspective (Akel taught at Travis High School, and Mass currently teaches at Lanier High School). "It's a mocku-dramedy with a dream sequence," laughs Story Editor Chad Darbyshire. "Our movie is pretty avant-garde." But the pleasures were simple. "It's cool to see so many people turn out for something you've worked so hard for," Akel says. "Watching people laugh, that's been the real highlight this year."

While the narrative competition comprised only eight features, Texas was well represented with the two aformentioned Austin independents. In the realm of nonfiction, The Creek Runs Red (co-directed by former Austin resident Bradley Beesley) and A Place to Dance (from writer/director and UT professor Alan Berg) competed against nine other films in the doc competition. The heartwarming feature A Place to Dance, making its world premiere in L.A., chronicles life at New Orleans' Jefferson Orleans, one of the last surviving big band ballrooms of the south. His subjects, Berg says, "affirm the value of the here and now. As one man told us, 'I may be dead tomorrow, but tonight I'm going to dance.'" Not even the aftermath of Katrina can stop the club's clientele – primarily septuagenarians and octogenarians fondly remembering the music of their youth – who remain determined to use the best of the past to enjoy the present.

The Creek Runs Red (edited in Austin by Leah Marino) is told from the point of view of the small community of Picher, Okla., and shows the town's reaction to a decades-old environmental disaster. "From the onset, we all agreed the film should be character-driven and focus on the town residents and their conflict rather than the environmental politics of the story," Beesley says of the provocative character study, which had a successful world premiere. But he also had other films on his mind: "My festival highlight was the awards ceremony, because Steve Collins and I made a pact that if my film won, we would share the $50,000, and if his film won, then Steve would give me his newborn child or his pants. Although The Creek Runs Red didn't win, I was happy, because Steve decided to keep the kid, and he took off his pants right there at the dinner table in front of our new friend Charlize Theron."

All of the competition directors were invited to a prefest retreat at Skywalker Ranch, the Northern California center of the George Lucas universe. A good time for the filmmakers to bond before the insanity of the fest, the experience also brought out everyone's inner child. "We all grew up watching Star Wars," Collins says. "So, it's very exciting to see the big wookie." Akel agrees: "Star Wars was the first movie I ever saw." But did you get to hang with Lucas? "I didn't bond with George," he admits. "We didn't get to play Connect Four or anything. But he seemed nice." "I almost stole a light saber," Collins says. "There was a very wimpy little lock on it, and I felt like I could probably jimmy it."

Meanwhile, Richard Linklater was present with A Scanner Darkly (see p.50) and for a discussion with film critic Elvis Mitchell. This proved memorable, as the ever-insightful Mitchell tried to figure out why "there's always one guy who's struggling to explain himself in [Linklater's] movies?" Linklater's answer? "It must be me." Linklater then explored more deeply the idea of obsession so frequently present in his films: "I like obsession. When someone's obsessed with someone, like when that crazy person approaches you on the street, only in a darkened theatre you're a little safer." Peppered with clips from his varied canon, the sold-out event had to turn away scores of hopeful attendees. Among other highlights was a directors' talk moderated by Green. Terry Zwigoff and Nicole Holofcener exchanged ideas about their respective processes, the state of the biz, and why it's good to work low-budget: The studio pays less attention, and you can get away with more.