The Latest From Z Zeitgeist

'Pathogen' and 'Zombie Girl: The Movie' 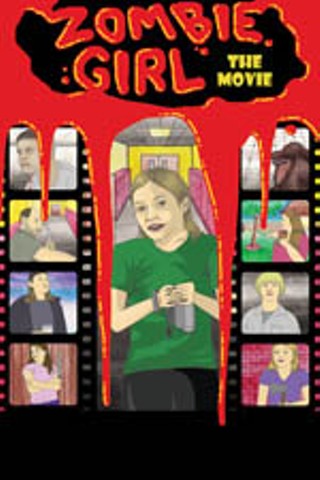 What's better than a feature-length zombie movie written, directed, shot, and edited by a determined 12-year-old girl? Perhaps nothing. But Emily Hagins' Pathogen, which premiered this spring at the Alamo Drafthouse, has spawned Zombie Girl: The Movie, a charming and thoughtful feature-length documentary about Hagins and her magnum opus.

Hagins says she started making short films in the fifth grade after being inspired by Peter Jackson's Lord of the Rings films. She learned how to mix batches of fake blood while working as a production assistant for local producer Rebecca Elliott (Snake Hunt: These Rattles Ain't for Babies). "It's fun to make," Hagins says, "and it's edible." A screening of Jackson's 1992 zombie creepshow Dead Alive at Harry Knowles' annual Butt-Numb-A-Thon further convinced her to attempt a low-budget "funny and scary" feature of her own.

Hagins wrote the script for Pathogen – about an experimental cancer-fighting "nanochip" that wreaks reanimation havoc on Austin when released into the municipal water supply – in two months. Casting her friends in the major parts "didn't work," so Hagins held auditions, and Tiger Darrow (The Cassidy Kids) joined the cast. Hagins secured locations – including Seton Northwest Hospital, the Crestview Minimax, and Kealing Middle School, where Hagins is a student in the magnet program – and began planning principal photography. Elliott and her producing partner Neil Reece came on board as production support, and Hagins' mom and "biggest fan," Megan, cobbled effects together from liquid latex and Halloween make-up. "And Jell-O," Hagins adds.

Meanwhile, Erik Mauck and Justin Johnson, hosts of the cable access show Between the Scenes, saw a post about the film on AustinActors.net. Intrigued, they contacted the Hagins family about producing a segment for the show, which snowballed into Zombie Girl: The Movie. Both films received grants from the Austin Film Society's Texas Filmmakers' Production Fund.

Having an adult crew with pro equipment tagging along "was stressful at times," Hagins admits.

The adult crew had its own issues. "I'm thinking to myself, 'We could go down to the access studio and get a shotgun mic that would make her sound so much better,' but that's part of the story, trying to experiment with stuff," Mauck says. "'Where do we cross the line with helping her make the movie a little bit better?'" Instead, Mauck and Johnson adopted a hands-off approach, "which sucked," Hagins jokes.

Like their subject, Mauck and Johnson were beginners of a sort. "We had never done a feature documentary. Everything we had done before was narrative," Johnson explains. "You just assume that once you start filming a documentary, you're going to come up with the story. There was the relationship between Emily and her mom. We knew that that was going to be one story."

Another was the digital revolution itself and what it means for young filmmakers, who can shoot and edit cheaply at home. "When we were Emily's age, [moviemaking] was reserved for the financially privileged only," says Aaron Marshall, editor and co-producer of Zombie Girl. "A VHS camcorder was $1,000. It took me 10 years of begging my parents for a camera." "Once you get into the story, you realize that this group of kids who are working together – not just Emily but the actors and friends – these are the same kind of kids who could be living down your street," Johnson adds. "Or maybe it was like you at that age. They're just very passionate."