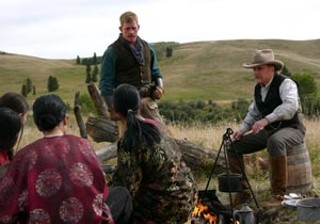 "I always say that the English have Shakespeare, the French have Molière, and the Russians have Chekhov, but the Western is ours," says pre-eminent film actor Robert Duvall. He produces and stars in the newest contribution to the genre, Broken Trail, presented on AMC this weekend.

Broken Trail is "AMC's first original movie." Over the years, "TV movie" or "made for TV movie" has become synonymous with cheesy stories, second- and third-rate actors, and weak production values. However, AMC's first foray into film is first-class, all around.

Duvall stars as Print Ritter, a lifelong cowboy who seeks out his nephew Tom Harte (Thomas Haden Church) to share some news: Harte's mother has passed away. Harte and his mother didn't part on good terms, so she left her small fortune to her brother. Because he's a decent and good man, Ritter finds his nephew and proposes a way to make things square: using the money to buy a herd of horses and drive them from Oregon to Wyoming, where they can be sold, leaving each man set up handsomely. The two set on their way, and so begins the obligatory journey, physical and metaphorical.

Visually stunning (and filmed in Canada), Broken Trail lusciously captures the Western landscape and all it stands for: the honest ruggedness, the free spirit of the open sky, the meditative crackle of the campfire, and, of course, the evocative image of the horse – sleek, agile, mysterious, and powerful. These images are enough to make any city slicker chuck it all for a pair of chaps. But what truly thrills is the rapport between Duvall and Church. As Ritter and Harte, they are both hard men, living during hard times (the late 1800s). Their understanding of each other comes with few words. Their lives have been all about wrangling animals, playing square, and minding their business. So, when they encounter a group of Chinese women (headed by Desperate Housewives' Gwendoline Yeo) shuttled by a callous handler to a mining town where they will be forced to work as prostitutes, the men keep a wary distance. However, when the handler makes a wrong move, Ritter and Harte have no choice but to intervene. The women don't speak English, and the men don't speak Mandarin, but they manage to understand one another enough to affect one another's lives in ways unimagined by all.

For all its good intentions, this is where Broken Trail stumbles. By earnestly recovering this history of Chinese girls unwittingly sold into prostitution by their unsuspecting families, Alan Geoffrion's screenplay is overly literary in the way it shares the women's predicament in the absence of an omniscient narrator. Little is left to anticipate, which weakens the story and inadvertently casts the women as barely more than simpering creatures. The two-part, four-hour film becomes more interesting later, when new characters are introduced sparingly, and, interestingly enough, when a romantic thread is introduced. Greta Scacchi has a small but bittersweet role as another woman the men rescue. The same cannot be said for Scott Cooper (Heck Gilpin) and particularly Donald Fong (Lung Hay), who become a hired hand and a (convenient) live-in translator, respectively. The two are given such little screen time one wonders why they're there to begin with. To their credit, each character shines with very little, which makes viewers that much more curious about them.

Directed by Emmy Award-winning Walter Hill, Broken Trail is redolent of the same gritty realism that marks Deadwood, especially in the "urban" scenes, where it's literally every living creature for himself (Hill's Emmy is for the pilot episode of Deadwood). Just when you're getting weary of the narrative overkill or the base brutality of the old West, the scenes between Duvall and Church reappear and suck you in like a new lover. Truly, their onscreen chemistry is a joy to watch. Could this be the beginning of new series? I hope not. However, another chapter in the story would be most welcome, letting audiences know what happened to the Chinese women – from their perspectives – and the others whose lives, fatefully, crossed with theirs.

Maybe it was the noticeable dip in ratings for last year's Emmy Awards broadcast that finally pushed some changes forward. As reported by several sources, a "blue ribbon" panel will select this year's nominees. Hopes are that a more representative selection of nominees will occur, instead of the same old same old. For those of us paid to follow this, we can only hope. This year's Emmy Award nominees will be announced July 6. The creative arts awards will be handed out Aug. 19. The full-blown awards ceremony will air on NBC Aug. 27.