Can the next-gen and the old-school coexist? 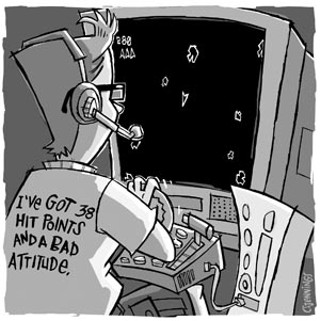 Oblivion – the realm of forgetfulness

The Elder Scrolls IV: Oblivion is as surreal as it is real. It's narrated by actor Patrick Stewart's finely aged voice, and you can spend hours just designing your character's appearance. From the width of the nose to the slope of the brow, every body feature has an extended list of subtle alterations. Once past the character design, Oblivion opens in a precisely detailed dungeon where no two bricks are the same. From then on, the visuals only grow more impressive: spades of grass minutely textured, a night sky so lucent and colorful as to make high-def necessary – a world clearer than your best memory.

If you don't memorize Oblivion's 48-page booklet or have years of RPG experience under your belt, you will likely be mired in a swamp of misdirection. There are clues left and right that you have to decipher, every mission is a complex maze, and your character is constantly bombarded with information that you have to decide is important or worthless. Oblivion approaches digital reality. Your character eats, drinks, sleeps, sits, and converses like a normal human being. There are 200 wrong decisions to every right decision you make. Few things come easily in this multifaceted world; therefore, if you play for less than 30 minutes, you will get little to nothing accomplished.

Retro – the realm of old, the antagonist

Meanwhile, in the same gaming universe, there's a new wave of old-school that's taking over the Xbox 360, and it's headed by Geometry Wars (see review, facing page). Accessible through Xbox Live, Geometry Wars is an intergalactic water-gun fight. The left stick controls the direction of your tiny horseshoe of a spaceship, and the right controls the direction of your limitless firepower, which you use to destroy the geometric shapes hurtling at you kamikaze-style. You gain points by destroying the geometric enemies, and your mission is simply to beat the high score. The design is simple, like the old Asteroids arcade game, playtime can range from 30 seconds to five hours, and the instructions are only three paragraphs long.

"Retro gaming is adjunct to everything that's going on right now," says Billy Cain, vice-president of Critical Mass Interactive in Austin. Cain has been designing games for 14 years; his company recently finished some of the graphics for Jaws Revenge. "The retro games are cultural memory," Cain says. "Other countries that we work with never had those games. Countries like India started with Lara Croft from Tomb Raider; they have no reason to buy a retro game."

On the other side of the card is David Kaelin, owner of Game Over Videogames in North Austin. His business is in the sales of vintage used games and their respective systems, knocking on the door of gamer nostalgia. "Statistics say the average player is 30 years old. They don't want the newest and greatest game. They want something that's easy to learn, something their kid can play that's not too violent – like a cartoon."

Yet, the forerunners in the gaming industry are launching at warp speed with over-the-top graphics and plots for the newest games. With actors like Laurence Fishburne and Mickey Rourke making a second career out of video game voiceovers, the line between movies and games is blurring at a fast rate.

"Games are definitely interactive movies," Cain claims. "We are competing with all types of media; you have to maximize the fun ... now."

"It's just sitting in front of a TV watching a high-definition movie; all the imagination is taken from it," Kaelin responds. Next-gen-console games like Oblivion take huge risks for big bucks. As of April 2006, Oblivion shipped 1.7 million units. The risk is that these juggernaut-budget games can cost more than $10 million to produce. Enter Geometry Wars: At $5 a pop, downloaded to your Xbox 360, it has no voiceovers, shipping costs, or packaging margins and relatively miniscule production costs. The makers at Bizarre Creations know how to turn a quick buck. They've sold more than 45,000 downloads this year. Game developers estimate a game like Geometry Wars costs between $10,000 to $100,000 to produce. But the question at hand is: Are retro games just an eye's blink in the game industry, or do they have a hold on the vision of the future?

Retribution – the strategy of a comeback

Canaan is a 13-year-old gamer who is familiar with Oblivion but a bit too young to recognize anything as "retro." His first system was a PS2; his first game was Kingdom Hearts. Canaan's most recent game was Marvel Nemesis: Rise of the Imperfects, which he played for up to three hours at a time. His record straight-playing time is five hours.

On a recent trip to San Marcos to visit the young gamer, I set up my Xbox and let him explore Oblivion for 35 minutes. We drove the sword into innocent civilians, laughed at our character's gnarly face, and spent the last seven minutes trying to find the destination, but we kept getting lost. Canaan was intrigued, but it takes more than half an hour to become fully engaged in a game of this ilk.

"I like how you can kill officers and take their stuff, and the graphics are really cool," he said.

Canaan's father told me he hates video games because they suck up too much of his son's time and are too violent. Point taken.

Next I threw in Geometry Wars Evolved. I was curious to see the effect a retro game would have on a gamer who is unfamiliar with the genre. On his second try at the game, he beat my high score. We feverishly passed the controller back and forth after each game, trying to one-up each other's scores. Yet we worked together, telling the other when to use bombs and other strategies. Canaan was commenting on the game nonstop. Once, during my turn, he raced to the kitchen to get a Popsicle and a chair. With the chair turned backward, he hunched over the backrest, trying to wolf down his Popsicle before it was his turn. The intensity heightened as the scores kept rising. We sounded like two Longhorns fans at the Rose Bowl.

Even before I had a chance to ask him, Canaan said, "I like this game, It gets the blood pumping and the adrenaline going. [In] Oblivion, you just kinda wait around, trying to figure out what to do."

Any parent can tell you that instant gratification is a child's mental candy, and Geometry Wars Evolved hits the indulgence button every five minutes. Cain had told me, "There is a huge reservoir of people that are being tapped by retro games." Canaan just became one of them. Gamers are of two minds: the mind that has a few hours and the diligence to get lost in an RPG, and the mind that wants to quickly relieve stress by blowing up some simple geometric shapes. Big money in games calls for big spending and hard time on next-geners. Quick, but smaller, returns is the retro motto. The final judging factor is how much cash and time you have to spend. What's the future of Geometry Wars and retro gaming? Do the math.