Going 'Beyond' With John LaZar and Erica Gavin 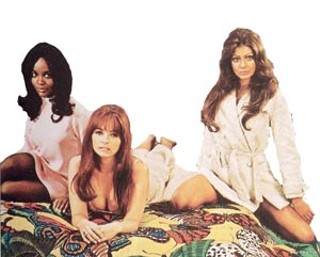 Nobody shot Erica Gavin like Russ Meyer. Except John LaZar, who, as the mad, bad, altogether dangerous-to-know Tinseltown popgun impressario Ronnie Barzell, aka Z-Man, puts the hammer down the throat of Gavin's doomed Roxanne in the mind-blowing opening of Meyer's onanistic masterpiece Beyond the Valley of the Dolls.

"This is not a sequel" proclaims BVD at its outset, and liability-dodges – in this case veering away from author Jacqueline Susann's 1966 trash-lit smash and 20th Century Fox's '67 adaptation – have rarely, if ever, been writ so large or so true. Beyond the Valley of the Dolls manages to cram more hedonistic debauchery and grandiloquently campy pseudo-moralizing into 109 minutes than any other film Meyer did before or since. (And on June 13, it'll finally be released in a special né-plus-ultra-freak-out version from Fox, dovetailing with this week's Alamo Drafthouse screening/reunion.)

However else one chooses to read it, it's also an entertaining slay-ride through the druggy, neon-daubed nightscape of Lost Angeles '69, simultaneously aflame with the desire to provoke, punish, and finally, released as it was in the wake of the previous year's Manson slayings, condemn the swinging Sunset strippers, weeping crocodile tearfuls all the way. (Did we mention it was scripted by longtime Meyer fan Roger Ebert?)

"I think it's an individual finger print," says LaZar, by phone from Los Angeles. "I think it still hits the youth. It's still a rebellious movie, isn't it? That's why it's still popular: Pretty young people doing rebellious things."

Meyer and Ebert's splendidly sordid tale of the rise and fall of girl group the Carrie Nations and the viper's nest of perversity they all too willingly fall prey to still retains its cutting-edge creepy-crawliness, thanks in large part to Gavin's presence. The titular star of Meyer's previous film, Vixen! – an unlikely box-office phenomenon that grossed some $21 million out of a $60 thousand budget in '67 – says "When Russ gave me the part in Beyond the Valley of the Dolls, I think it was sort of his way of thanking me for doing Vixen!

The end result of that direction remains the pinnacle of Meyer's career, a surrealistic pillow fight between gogo-booted heathens and innocents seduced. It's top-notch bottom-drawer material and, in its own willfully warped way, one of the highlights of Seventies filmmaking.

"Is it one of the best films of the Seventies? That's not for me to say," says LaZar before answering, "Yeah, I think it's one of the best films – why not? It's certainly a beautiful film done by [director of photography] Fred J. Koenekamp [Patton]. And it had the whole force of 20th Century Fox behind it in 1969 and '70. You know, that was the same year films like Butch Cassidy and the Sundance Kid came out, so, to ask me if it's [one of the best] is subjective. Do I stand by the film? Yes."

"We had a Hollywood premiere," Gavin adds, "with Army Archerd and the red carpet and all that glam, but that was it. And then it was over. There was no anything. And that's what's so great about the fact that this DVD is being released. It's like it's being given its second chance. It's just too bad that Russ isn't here."

Beyond the Valley of the Dolls Reunion

Beyond the Valley of the Dolls, Alamo Drafthouse, Erica Gavin, John LaZar