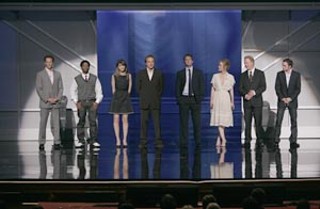 Studio 60 on the Sunset Strip

The "up-fronts" took place last week. That's when the networks trot out their new fall series for advertisers and start the buzz over brand-new series. Some networks are shaking up their schedules, while others are sticking with the tried and true. Fox, which made a name for itself with its edgier fare and by loudly breaking from the pack by launching their series at will (actually, in deference to baseball season), takes a more conservative approach. To avoid interruptions in series (and viewers' attention), they will launch their series weeks before baseball coverage begins or hold until baseball season ends.

CBS is also sticking with the tried and true, launching only four new series. It cuts dead weight when it puts its Sunday Night Movie franchise to rest. Even fewer new series will launch on the new CW (a merging of the WB and UPN). But there are several notable twists. First, the previously canceled 7th Heaven has been renewed for an 11th season. "The overwhelming outcry from fans and the fact that the series' ratings were up in key demos last season" saved the show, according to press materials. Previously on-the-bubble favorites Gilmore Girls and Veronica Mars will air back-to-back on Tuesday nights. In a variation on Fox's Sunday Night Comedy block, the CW airs sitcoms that night, anchored by two popular series: Everybody Hates Chris and an encore of the reality series America's Top Model. The CW's Sunday night block gives the network "four hours of programming starring African-Americans on the most watched night of the week."

Mixing it up the most are ABC and NBC. Each network is launching at least seven new series (not including midseason shows) and, in an effort to win the still coveted Thursday night ratings war, have positioned their heavyweights in key time slots. The shake-up is most pronounced at ABC, which moves its high-performing Grey's Anatomy to Thursdays at 8pm, competing against NBC's highly anticipated Studio 60 on the Sunset Strip. Emmy Award-winners Aaron Sorkin and Thomas Schlamme (The West Wing) work with a dynamite cast (Bradley Whitford, Matthew Perry, Amanda Peet, D.L. Hughley, Timothy Busfield) in a "crackling look at the backstage politics behind a late-night comedy show." (Curiously, 30 Rock, a new NBC sitcom set for Wednesday night, EP'd by and starring Saturday Night Live writer Tina Fey, has a similar premise. Maybe it doesn't crackle.)

Here are the fall schedules as released by each broadcast network. Changes are inevitable. New series are in bold.

(series will launch before or after baseball season)