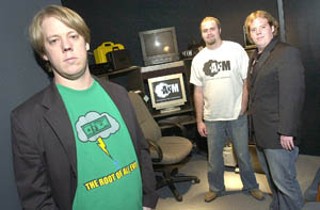 Like Marmalade Sky, the trio behind Advance Film Mechanix – Brad and Brandon Sappington and David Carsey – formed their production company in hopes of raising money to make their own feature film. That hasn't happened yet, but in the meantime, AFM has created its own unique niche in the increasingly crowded world of Austin production companies, one that to both their knowledge and ours hasn't been done anywhere else in the country. Brandon explains:

Last of a Dying Breed

"What makes Advanced Film Mechanix unique is that we're using a modified digital camera system to shoot on. We want to have a very specific look to our stuff, and to that end we've melded analog and digital filmmaking into a new kind of hybrid. And this is something that no one else is doing. What we've done is to create a modified DVX digital camera, which we've then combined with some really high-end, 35mm lenses, and that just boosts the production quality amazingly."

It's enough that a smallish start-up like AFM – whose far North Austin office/studio looks, from the outside at least, to be straight out of Office Space's anonymous office-park hellscape – would make a technological end-run around any number of far larger and more established companies, but they've also focused their considerable skills on the emerging field of portable media.

"And, by that, we're referring to cell phones, PDAs, iPods, hand-held devices of any kind," Brandon explains. "Right now, there's a lot of buyers out there and very, very little content. And, so, we've come to the conclusion that this is a niche that we'd like to get into and one which is only going to become more lucrative. That whole field is totally underdeveloped right now. You can go pick up over 100 books that'll tell you how to shoot your feature film, but there's virtually no information on portable media because it's anybody's guess how long content should be, how it should be shot, what it should be, the structure of it, and so on. It's an emerging field of content and right now it's wide open. And we'd like to be part of that."

AFM's open to submissions from "anyone, really. We've got a submission form you can fill out on our Web site," but, as Brandon is quick to explain, "Ultimately, we provide production support in any level at any point in your production. If you come in and you need Fisher dollies and cranes and us to find you production insurance and actors and get your story straight and guide you all the way through distribution – that's what we do. If you come in and you need us to find you just one location, we can do that, too. We do it all. Eventually, we aim to become a one-stop shop where you'll be able to rent equipment from us or rent studio space. But really, we do it all."