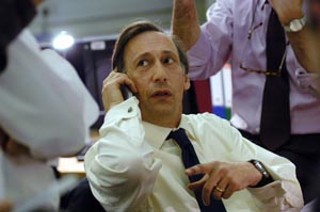 The Thick of It

British actor Chris Langham is the master of the vacant expression. That might not seem like high praise until one considers that veering off course would make him appear ridiculous or in need of special aid. Instead, Langham is so adept at this utterly blank look it's scary. And hilarious. Fortunately, he has an ideal vehicle to share this talent in the new workplace comedy, The Thick of It.

Part scripted, part improvised, the new comedy is placed in the corridors of British government. Langham plays Hugh Abbot, a newly appointed government minister whose only real talent seems to be as a hapless flak catcher and for his ability to embroider spin to preposterous heights without a trace of embarrassment. Opposite Abbot on the intellect spectrum is Malcolm Tucker (Peter Capaldi), the prime minister's Machiavellian chief political advisor who works behind the scenes. Tucker knows where all the bodies are hidden and pulls strings, tarnishes egos, makes and breaks careers, and delivers blood-chilling threats – all before tea time.

The Thick of It has been described as The West Wing meets The Office. The comparison is useful, but weak. By blending the neuroses of ambition with the foibles of ego, The Thick of It is a delicious satire that would be delightful if there weren't the nagging sense that it's closer to the truth than anyone would like to think.

The Thick of It airs Fridays at 8pm on BBC America.

From the "I can't leave you kids alone for a minute" files: While I was out of town for a few days last week, it looks like ME Television VJ Paul Saucido got himself into a dustup about a ring tone. Yes, a ring tone, those downloadable snippets of music or sound for cell phones. Apparently, a tone he developed for Cingular was deemed racist and removed from the company's menu of choices. Among his package of ringtones (which have since been removed), "La Migra Alert" has Saucido using an exaggerated Southern accent, declaring, "I'm deporting you back home-o," poking fun at the habit of adding an "o" or an "a" to the end of English words to miraculously cast them into Spanish. An online piece about the matter can be found at www.gearlog.com/blogs/gearlog/archive/2006/05/11/11497.aspx.

Saucido hosts Sonido Boombox, a showcase of contemporary Latino music and music videos from across the Americas, with features on events in Austin's vibrant Latino music, art, and film scenes. Find new episodes of Sonido Boombox on cable channel 15, Monday, Wednesday, and Fridays at 3pm.

Catch Saucido live when he hosts two showcases next weekend as part of Austin's Latin Music Month. On Saturday, head to the ME-TV Studios, 501 N. I-35 to see Cristantes, SPIGGA, and Haydn Vitera. Admission is $20. Sunday's showcase takes place at Ruta Maya on South Congress with Edo and Latin at Heart added to the lineup. Tickets on Sunday are $5. Both showcases are fundraisers for the Austin Public Library Foundation to support the Cepeda Music Garden Project. For more information, call 485-1200.

More Spanish-language TV comes to Austin when LAT TV launches May 19. Airing on Channel 17 as KVAT, the new Spanish language channel promises quality, diverse programming from across Latin America, including "the largest block of children's programming," according to a recent LAT TV press release. Given the recent consternation over the lack of Tejano music on commercial radio airwaves (which appears to be turning into a localism issue), viewers may be interested to know that LAT TV also promises "a 30-minute time slot twice a day for local community programming, and also will air a community calendar of workshops, fundraisers, job fairs, and other local events eight times daily." Like other channels, LAT TV will offer a 30-minute newscast – airing at 7:30pm – featuring local, regional, national, and international news.

Austin is one of five LAT TV launch sites. With headquarters in Houston, LAT TV will also air in Dallas, Phoenix, and San Antonio.

The Thick of It, Chris Langham, Paul Saucido, ME Television, Sonido Boombox