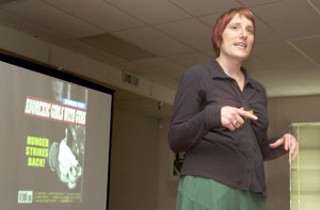 Just hear me out. What's the scariest thing ever? No, no, no. Worse than Jason or Freddy or even Dubya. I'm talking final-exam time. The dream. You show up late, unprepared, and in your underwear – maybe altogether naked. Everybody laughs, points. It's a horror film, got it? Imagine University of Texas Film Institute students in the Feature Film Lab who, for their final exam, have to pitch a movie to a group of industry pros – on a Saturday, in this case May 6. Four groups, each with a writer, director, costume designer, cinematographer, production designer, and a couple of producers waiting to be grilled. They've shot a few sample scenes, planned their spiels. Inside, these folks are quivering mush; outside, they're all smiles. Dead Poets Society meets The Shining. Can't miss! Oh, and to up the stakes, one of the groups might have their film chosen by Burnt Orange Productions and then actually made. Now that, my friend, is pressure.

We fade in on Tom Schatz of UTFI, explaining how they culled the best screenplays written by UT grad students down to the final four, all American Idol-like, before turning them over to students studying film, dance, theatre, and even a lawyer wannabe.

First up: Anorexic Girls With Guns. Director (and Chronicle contributor) Toddy Burton walks up solo in front of the movie bigwigs and spills her guts: "It takes a single idea, like writer's block or ambition, and satirizes it." We've got the fat girl who's befriended by a proud anorexic. "We're living in a society where on a daily basis we're assaulted by pop culture," Burton says. She lays out the film's motto: "Food is porn." It's a comedy. Nicely done. But then the bigwigs chime in, and it's not pretty. They hate the title. How about we start with the actress? She's beautiful, but smart. Been around the block and knows a good film when she sees it. Someone like Dana Wheeler-Nicholson from Fletch. The title gives it a B-movie quality, she tells the students. Then a filmmaker lays down the law. Think Cauleen Smith, writer/director of Drylongso and a UT prof. "Your camera angle choices are dramatic, not comedic." Ouch!

Next: Finish the Job. Soldiers come home from Iraq. "It doesn't deal with the war we're fighting in Iraq," says director Ya'ke Smith. "It deals with the war they'll be fighting at home." A lost leg, war flashbacks, love relationships. The sample scene they're showing was shot for $50, production designer Samantha Avilla admits proudly. But then comes the panel. How about one of those agents everybody's lusting to get, somebody nice but intense? I'm seeing Jared Hoffman of Creative Artists Agency, a writer's agent. "This probably won't be fun, so I apologize ahead of time," he says, staring the students down. "A character-driven film is the hardest to pitch," he explains. "Nothing blows up." Another director next to him (a good guy who also writes, like Tim McCanlies of Secondhand Lions) agrees. "You didn't tell us where you're going," he says. Are you shaking yet?

Meet Five Time Champion. Think Days of Heaven meets The Squid and the Whale, writer/director Berndt Mader says. A 14-year-old is torn between sex and science. "A quiet story of self discovery," says the auteur, who worked on David Gordon Green's George Washington. The panel cometh: The producer, someone like Anne Walker-McBay, who's used to Richard Linklater types. "I think you need to try a little harder," she says. "I shouldn't have to read the script." I know I'm scared now!

OK, how about we make this scary movie even scarier? Night Terrors. The students are all tight smiles, dressed studiously casual or businesslike with pearls and blue blazers. "A mother hangs herself from a tree and afterward her daughter can't sleep," says writer Alison Eakle. And there's a ghost. And it possesses the girl when she sleeps. "We've got an amazing ghost," says director Rene Pinnell. "It can do anything the ordinary ghost can do, but it can do more." The panelists (maybe they turn into werewolves by this point? ... just a thought) sharpen their claws. "I was looking for something that would make it cool," one says. "That was missing."

Have I got you? Oh, my ending? They all go out for drinks and admit the students did a great job. Or it could be a bloodbath. Your choice.

"Film News" will return next week.