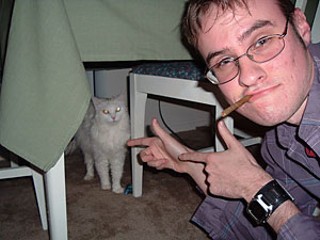 If you were a nerd in a loud shirt, would you want to tell the world? Are you inclined to show off your bad Scrabble hand? Or would you rather join a scavenger hunt with 400 people from across the globe? From the artsiest challenge for the distinguished Lomographer to the goofiest games, photo memes spread like the chickenpox because they engage the essential human desire to see and be seen, to create and share representations of our lives, and to find communion and share tasks with other people. Why else would netizens from Campos dos Goytacazes to Rheineck, Swaziland, take pictures of miniature cars "parked" alongside full-sized ones? Maybe just because it's actually pretty funny, and everyone likes to be in on a joke.

Poke around on Flickr, MySpace, or LiveJournal and you'll find communities of photographers – amateur and professional – rising to the challenge of "doing the Lynndie" (www.flickr.com/groups/lynndie), "Tubestalking" with camera phones (www.flickr.com/groups/tubestalking), and Photoshopping weird and wonderful creations like the beautiful and disturbing mirror images at http://community.livejournal.com/reflect_it. There are, of course, groups for camera geeks (the Russian-made http://community.livejournal.com/retro_camera is a favorite of mine) and niches for every type of hardware and technique; if you use Diafine developer, you're far from alone (www.flickr.com/groups/diafine).

But the granddaddy of them all is Photo Friday (www.photofriday.com), which has been issuing weekly challenges since 2002 and garners close to a thousand entries per topic. If Wednesday suits your schedule, there's Lensday.com. You have to join a mailing list to play in Photo Thursday (www.photothursday.com), but if you've got the time, you can illustrate concepts like "Crunchy," "Feet," and "Bored." Why not?

Heather Champ's Mirror Project (www.mirrorproject.com), meanwhile, has been going strong since 1999, when Champ, a graphic designer from San Francisco, blogged a call for submissions of self-portraiture using mirrors. Champ told O magazine she began photographing herself in mirrors after her parents, both photographers, died. With the help of PayPal-ing fans and Montreal-based programmer Aaron Straup Cope, the Mirror Project grew from one woman's visions of herself to a global experience for all.

After several generations of experimentation, such memes and challenges are drawing attention from the analog world, as well. This June, the Art Gallery of Ontario will host an exhibit featuring submissions from the Flickr group "Art Matters" (www.flickr.com/groups/artmatters) as part of its first installation created entirely by the public. Photographers Addi Somekh and Charlie Eckert, who travel the world photographing people in balloon hats, have inspired a documentary film (Balloonhat) featured in the Santa Fe Film Festival. It's a far cry from "Just Golden Retrievers" or "Amateur Female Feet" indeed.