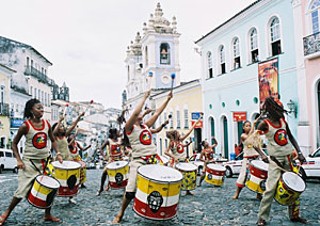 This terrifically engaging documentary begins with Ruth Landes' anthropological case study of the Candomblé religion in Afro-Brazilian society, published in 1947's City of Women. Landes seems to have fallen in love with the Candomblé sect, whose matrilinear, egalitarian culture is quite like no other place on Earth. In Bahia, the heart of black Brazil and the former cornerstone of the Portugese slave trade, Yoruba traditions imported from Angola have been kept alive by the descendants of people whose family structures, language, and religion were demolished by the cataclysm of slavery. Men were sold into labor, and women kept everything else alive: children, grandchildren, their own commerce, the whole of their culture. Slave women adhered to Candomblé – a polytheistic, animist system of beliefs and magical practice – while pretending to be Catholic. The leaders of Candomblé are its high priestesses, and within the culture women and men are politically, personally, and spiritually equal. Landes thought it utopian, and the film is like a valentine to the women of Bahia. Faria captures the city's markets, where women almost exclusively make up the merchant class, in decadent long takes, lingering on the movement and color around his subjects. For what is basically an expository film – there's no narrative, but the movie centers upon Mae Stella de Oxossi, a prominent priestess and Candomblé leader – Faria's visual style is extremely sophisticated and distinctive, employing a lively sequence of cut-out animation to set a breezy and vibrant tone. It is rare to recommend a documentary for its style as much as for its subject, but Cidade das Mulheres is such a film.