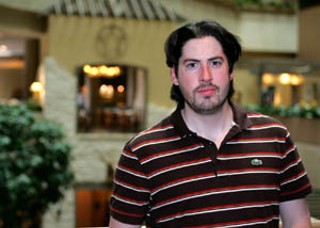 Nick Naylor is an image of perfection: He's well-groomed, articulate, handsome, witty, and above all, he'll make you believe all his decisions are your own. He's the type of guy who started at quarterback every game, never made bad grades, and always had the crust cut off his sandwich. Yet, somehow, he was still the most popular guy in school. Even the art kids loved him. Smooth.

Thank You for Smoking is Jason Reitman's homage to Nick Naylor, a fictional Big Tobacco lobbyist trying to play both sides at all times, completely personified by Aaron Eckhart (In the Company of Men, Erin Brockovich). At one end, he's defending the most often demonized force in international notoriety. At the other, he's a role model to 12-year-old son Joey, sweetly played by that creepy kid in Godsend, Cameron Bright.

The film, a picture of corruption and idealism in an imperfect world, is Reitman's first feature-length, but his name should be familiar. The son of famed producer/director Ivan Reitman (Meatballs, Animal House, Stripes, Ghostbusters) is no stranger to comedy. But where his father went for the slapstick – albeit hilarious and formative – Jason Reitman (himself undertaking an indie-comedy production company with longtime producer and friend Daniel Dubiecki) goes for the intellectual and poignant.

"I was a really inquisitive child," explains Reitman after his stellar SXSW 06 screening, which turned away festivalgoers by the dozens and ended in raucous applause. "My point of view on life in large part comes from my parents and particularly my father. I spent a lot of time in the car with him on the way to set, traveling with him, asking him all sorts of questions. I think [Joey Naylor's] inquisitive nature and that admiration of one's father definitely parallels my relationship with my dad."

Some of the answers, lessons, and advice he received from his father must have been in mind as the 28-year-old Canadian crafted a timely political satire based on the critically acclaimed Christopher Buckley novel.

"I think self-awareness is one of the wonderful things about the book," Reitman says. "Most political movies are never self-aware. They're too busy hammering you over the head, and they've no idea that they're in a mania over telling people how to live."

"We don't sell Tic Tacs, we sell cigarettes. And they're cool, available, and addictive. The job is almost done for us." – B.R. Aaron Eckhart (r) in Thank You for Smoking

It's Washington, D.C., in the not-too-distant past. Big Tobacco executives are battling do-gooders and health advocates across the country, but lawsuits and bad press have not yet brought down the establishment. B.R. (J.K. Simmons) is Naylor's gruff and egomaniacal boss at the Academy of Tobacco Studies – the marketing epicenter of the tobacco industry.

B.R. answers only to the Captain (Robert Duvall), the last hacking-up-a-lung, good-old-boy tobacco patriarch in the country. Recognizing Naylor's uncanny abilities and charm, the Captain sends him out to shush none other than the Marlboro Man, Lorne Lutch (Sam Elliott in an outstanding performance). Then there's Naylor's trek to a Hollywood meeting with superagent Jeff Megall (Rob Lowe) in attempts to reintroduce smoking to the movies – with son by his side. And there's a profile in the works by D.C. investigative reporter Heather Holloway (Katie Holmes), who has a bit of a reputation for getting exactly what she wants.

Offscreen, meanwhile, the tabloids responded to something other than plot. To make a long story short, the Sundance Film Festival screened Thank You for Smoking, but a 12-second scene was mysteriously missing from the tape. Those 12 seconds at the end of a reel contained the now-famous Katie Holmes-Aaron Eckhart sex scene. No, there was no Scientology conspiracy. There isn't even a butt shot. It was simply a projectionist error. Heather Holloway and Nick Naylor's love nest is now back in the movie, "humorous humping" and all.

On the sidelines is Buckley's pitch-perfect MOD Squad (Merchants of Death) – "All the scenes in the script with the son are of my invention," Reitman says. "The funny stuff is of Chris Buckley's invention" – the top lobbyists for the alcohol (Maria Bello), firearms (David Koechner), and tobacco industries. There's the lone "good guy" – William H. Macy's Sen. Ortolan Finistirre, a Birkenstock-wearing, cheese-loving Vermont politician. Finistirre mounts a petition to add a skull and crossbones to every pack of smokes, but Naylor isn't worried. The man with the constant grin can conquer anything.

"I went to a symposium where Jeff Wigand [portrayed in The Insider] and a real lobbyist were both talking," Reitman recalls. "The guy that works for Altria – the new Philip Morris – was great. I loved him. Great suit, handsome, charming, well-spoken, unhateable. If you were Big Tobacco, why would you hire someone that was greasy? If you're going to have a spokesperson, he might as well be likable, and he was really likable. Not that he got anyone in the audience to change; that's not his job. His job is to go out there and be unhateable, so it just doesn't get any worse.

"'Well, this law is just another example of the rich trying to suppress the poor,'" Reitman impersonates. "'If there's anything we believe in at Altria, it's freedom.'"

"That's the beauty of argument: If you argue correctly, you're never wrong." – Nick Naylor

"This is where the Libertarian argument of personal choice comes to a head," Reitman says, "because you suddenly have to deal with the fact that not everyone's an adult; not everyone's cognitive and can make decisions on their own."

A Libertarian himself, Reitman wasn't interested in touting right or wrong in Thank You for Smoking, which is what makes the movie great. It doesn't preach. It doesn't judge. It doesn't even point fingers. Nick Naylor is no worse than Sen. Finistirre. They're both men just trying to pay the mortgage.

Now that Big Tobacco has shelled out billions and erased its endearing cartoon images, the tirade continues. Smokers are becoming second-class citizens. Movies have taken the sex out of cigarettes. And most recently, smoking bans are lighting up around the globe. What would Nick Naylor say to the increasing ban on the (legal) green stuff?

"Nick Naylor would say that it's un-American, that Nick Naylor believes in the independent business owner," Reitman flows. "He believes that a person who can save up enough money to open up a business, particularly someone who believes in music and wants to have a place to showcase that, should have the choice of whether or not they want to have a smoking or nonsmoking establishment. If they want to have a nonsmoking establishment, that's fine with Nick Naylor; he believes in personal choice. But to take that choice away from the person is wrong and un-American."

For his part, Reitman seems to echo his main character in commenting on what his debut's initial success might mean: "At least I've made a movie that I believe in, and wherever I go from here, at least it will be my way."

Thank You for Smoking, which screened at SXSW Film 06, opens in Austin on Friday, March 31. For a review and show times, see Film Listings.