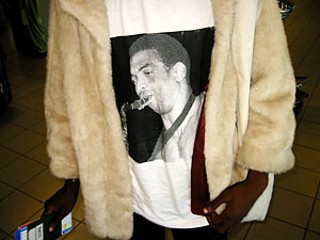 "Don't be fooled," shouts Femi Kuti to the enormous crowd that has gathered to mourn the death of his father, musician and activist Fela Kuti. "He beat the hell out of my father. Why? Because he was singing about things we still see today." It is 1997, and Femi is begging his fellow countrymen not to vote for Olusegun Obasanjo, whose military regime ruled Nigeria for decades. Despite Femi's warning, and the harsh criticism on the bestselling records of Fela's, Obasanjo was voted back into power in 1999, continuing what many see as the colonialist grip on Nigerian resources. This film follows the continuing struggle of Femi, who, like his father, uses music to inform the people of their government's corruption. The subject matter is timely, especially in light of recent international attention paid to the struggle against Shell in the Nigerian Delta. Unfortunately, some of its considerable power is lost in the confusing storyline of Ollman's second documentary, far less focused than his first, 2003's The Yes Men.