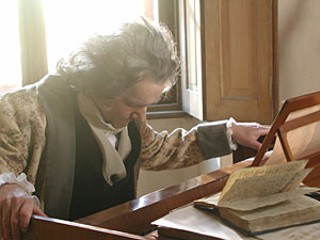 How far would you go for a lock of the Maestro's hair? And, more intriguingly, how far would the Maestro go? That's the premise of Weinstein's unique documentary, which incorporates re-enactments, long-forgotten silent films, and the actual snippet clipped from Beethoven's cadaver the day after his death. Based on the book by Russell Martin, Beethoven's Hair follows the wholly improbably trajectory over the ages of the genetically coded micro-'do, from its last days atop the composer's brow to its miraculously safe passage through Vienna into Denmark during World War II (where it was secreted among a band of Jews hidden in an attic by a compassionate Danish physician), and from there to Sweden, Sotheby's, and, finally, to two Americans: Arizonan urologist Che Guevara and spindly elder Ira Brilliant. (As if you could make that up.) Weinstein's witty doc is consistently engaging, even if your musical tastes run to rock & roll: Ludwig van is likely still spinning on Beatles-era outrage alone, but one likes to think he'd wind down a bit for this affectionate portrait.