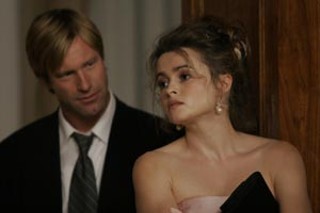 Conversations With Other Women

It only takes one night to change a life. Conversations With Other Women is Hans Canosa's narrative on undying, irresponsible love – undying in that time only erases the bad memories and irresponsible in that sometimes the good ones should be forgotten, too. Shot entirely in split screen, the rekindled love affair between exes expertly embodied by Helena Bonham Carter and Aaron Eckhart unfolds with each layer of Bonham's bridesmaid dress: secretively, guiltily, and exuberantly. Perhaps better suited for the stage, Conversations is an exercise in human emotion only, no action required. In the hands of lesser actors, it would be a mess, but in the minds of Carter and Eckhart, the sometimes-jarring film technique is easily forgotten. Dissolving the what-ifs of a failed marriage is much more provocative than trying to forget it.