Are You There, God?

'Eve and the Fire Horse' 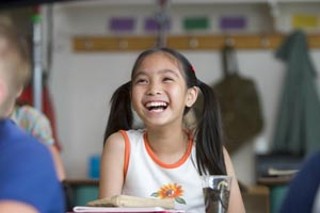 Julia Kwan's first film is a small miracle. The story of two sisters (Phoebe Jojo Kut and Hollie Lo) growing up "one-and-a-half generation" Chinese-Canadian in polyester-doubleknit late 1960s Vancouver, the movie wanders dreamily through the universal territory of childhood while apprehending the distinct issues of the Asian immigrant experience: assimilation and pluralism, tradition and modernism, and the collision of world religions. If Judy Blume had been part of the Chinese diaspora, she might have written a story like this: set authentically in the world of adolescent girls, and intimate and lyrical instead of bombastic and sprawling. It's also beautifully acted by an international cast that features Mainland icon Vivian Wu of The Last Emperor, and it's more than incidentally funny in weaving its tale of Chinese girls who catch Catholic fever after a tragedy at home.

"I'm dealing with some pretty heavy themes, like religion, death, and superstition," Kwan explains from Vancouver. "I wanted to present it with a lightness. There's definitely a bit of whimsy in the film. And it's filtered through the eyes of a 9-year-old, so it's about seeing with the imagination and the magical thinking of children."

Smart and solidly PG, Eve racked up awards on the Canadian festival circuit and played to raves at Sundance, where it won the Special Jury Prize in the World Cinema Dramatic Com-petition. "I feel very lucky to have that distinction," Kwan attests. "It's been amazing how [the film] has crossed over regardless of gender and race. It has resonance with a lot of people – children of immigrants, lapsed Catholics, or people who just relate to the girls and connect with their story. "It's a wonderful surprise. That's what you crave as a filmmaker."

At Sundance, Ken Eisner wrote in Variety that "Careful handling could take [Eve] to the family finish line." Just the same, and despite the film's warm reception, Kwan is cautiously optimistic about such a prediction.

"Personally, I don't define it as a family movie. It's a movie about children, but it's not a movie for children, although they would enjoy it. It's kind of a hard sell, because it's partly subtitled, and it has an Asian family, so I don't know how commercially viable it is, but I'm hoping people can connect with it on an emotional level. I'm hoping we will find U.S. distribution and more people can see it."