John Hyams' ode to rodeo stays on for a surprising 5,760 seconds 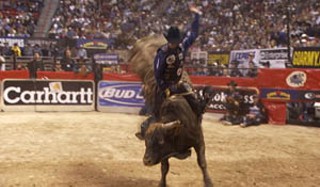 In Elk City, Okla., an old lady we know only as Mamaw sits in a recliner, lapdog wriggling free, curlers in her hair itching to, grandson looking on with a mix of adoration and dear-sweet-lord-please-stop-filming discomfort. Not because of who she is: She's his grandmother, wise and funny and full of love. There's a photo nearby of a much younger woman with a cigarette dangling from her mouth as a bull bucks beneath her. If she looks cool and strong and sexy in it, part of the reason is probably that she was a housewife who had taken a big dare and delivered even bigger.

No, Justin McBride – 27 years old, screws in his right leg, second place in regular-season cumulative points as he reaches the 2004 Professional Bull Riders Inc. World Finals – is discomfited because a sketch of Mamaw's husband, his grandfather, dead just before he was born, after a bull bucked way too erratically, hangs even nearer. And because of what his widow's saying.

She should know. McBride should, too, but he can't allow himself to acknowledge it. Neither can the other 44 riders – fellow contenders and documentary principals Mike Lee (subdural hematoma) of Paradise, Texas, and Adriano Moraes (you name it) of São Paulo, among them – headed for Las Vegas and the chance at the PBR's million-dollar purse, not to mention its big gold belt buckle to end all big gold belt buckles. Director John Hyams believes this is what Rank – and, in turn, rodeo – comes down to.

"Our documentaries, in a sense, reference fictional films more than they reference documentaries," Hyams says by phone from New York. "With Rank, we were thinking about the American Western genre. We were thinking [about] examining the archetype of the American cowboy in a contemporary setting. And, so, you're dealing with all these themes of courage, honor, and humility, of a man speaking with actions instead of speaking with words, and how this is very much alive in these men. ... They try to downplay the hazards of what they're doing. It's really in their character to not be dramatic about the risks, but you can't ignore the danger: They're not going to avoid serious injury. Every one of them is going to get hurt bad.

"But the minute you have something in your head, the animal's gonna know about it," Hyams continues, "and you're gonna get tossed. You're going to lose." Or, as Baylor University Medical Center specialist Dr. Tandy Freeman tells us amid horrific original footage, "Wimps don't make it this far."

No shit? Take it from me: Wimps at the theatre or on the couch do. For an hour and a half, at least, we respond to real people taking big dares and delivering. Rank, produced by the Independent Film Channel and scheduled for air (and, possibly, theatrical release) in the fall, is a very interesting work: formulaic, slick, bold, and superior. Hyams' "three- or four-person crew" – the same that made 2002's The Smashing Machine about Ultimate Fighter Mark Kerr – shot it so beautifully before editing it so effectively and setting it to a Michael S. Krassner score so instrumentally full, emotional, and juxtaposed, that the viewer feels as if he might be watching Errol Flynn, Clint Eastwood, Aeon Flux (hi, Charlize), and Mel Gibson battle the Death Star instead of cowboys battling bulls tagged Crossfire Hurricane, Mudslinger, Hotel California, and Western Wishes.

Or those bulls battling the cowboys. For his part, Hyams says he often directed from their points of view. After all, as stock contractor H.D. Page says of Mudslinger, "He's the man, in my opinion. He gives it everything's he got, never takes a day off." H.D.'s dad – Hyams calls the duo his "benevolent antagonists" – is Dillon: "I can't say that I don't like to throw the guys off, but it really doesn't bother me for them to ride one of mine. I just want my bulls to perform at their best." Moraes, the brilliant, near-crippled legend: "Bull-riding is dancing ... pretty much neutralizing what the bull is doing. ... You gotta have a lot of balance, a lot of core and lower-back strength. And, uh, a lotta love." The bulls, McBride matter-of-facts, "are the best athletes I've ever seen."