'Slam Planet: War of the Words' 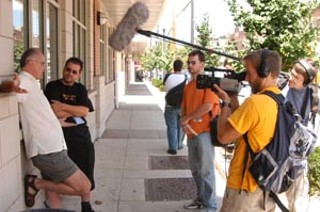 "Slam is an artistic, cultural, and social movement."

"My main point when I slam is to rock the audience. Not just rock 'em, but rock the fuck out of 'em."

"Anytime we can hijack the language and make it do our bidding for social change, for the greater good, it's a good thing."

Leave it to Austinites Mike Henry and Kyle Fuller (and Executive Producer Tim McClure of GSD&M), then, to try and untangle the knotty cultural skein of these mad, burning poets with their concussive consonants and cool fluid vowels stacked one atop another, gritty, word-bearing alphabet bricks, interlinking like a barrel of monkeys bearing a thousand typewriters and a million rhyming thesauri, but no time limit – yet.

Henry and Fuller's debut doc, Slam Planet: War of the Words, nails it but good, and, by virtue of its own innate lyricism, becomes an audiovisual ode in its own right, following close at the heels of the Austin Poetry Slam team as they head off to the 2004 Slam Poetry Nationals in St. Louis and keeping midnight company with ever-more-clever wordsmiths like the redoubtable Christopher Lee, a shattered mirror that nonetheless reflects inner glories. St. Louis? Never mind the Arch: Here's the Tower of Babble.

Austin Chronicle: Slam Planet almost didn't happen, thanks to a fire in January, 2005, that almost wiped out all your footage and equipment before you even began editing. Now that it's safe and sound and finished, what sticks with you the most from the experience?

Mike Henry: You know, we've been saying "It's not just a movie, it's a movement," and, to me, making Slam Planet is just another part of the work that I've been doing for the past 10 years. The question was how to take this outsider art form that began in little dive bars and has crawled up through the muck and the mire to where it is now just on the strength the art itself, and how to take this art and get it in front of as many people as possible. Because I think that's an important thing to do – I've got that bug, and slam has always been my project. So, for me, this is just another part of the whole poetry slam movement.

AC: How many hours of footage did you end up shooting?

AC: And the finished film is how long?

AC: Yikes. For a two- and often one-man crew, that had to be rough. How did you do it?

MH: Man, I have no idea. I really don't. Like the saying goes, you make the actual movie in the edit bay, and I really think that's true. There's so many different films contained within this footage, and, plus, there's a lot of different ways we could've gone that would have been great, but they wouldn't have been this movie.

AC: How did you and Kyle Fuller handle the co-direction?

MH: Because of the structure of the film, we follow two groups of poets, the Austin team and the New York City team, and so I handled New York, and Kyle focused on Austin. There was crossover, sure, but for the most part, I spent most of my summer in New York, by myself, just running around with my camera and a bag of gear, hopping subways and chasing poets.

MH: Well, yeah, it was. We've just been lucky to be able to complete the project and finally get the word about slam out to, hopefully, a much larger audience.

Slam Planet: War of the Words