Come in From the Old

Warming up to folksonomies, recommendation systems, and glocalized environments 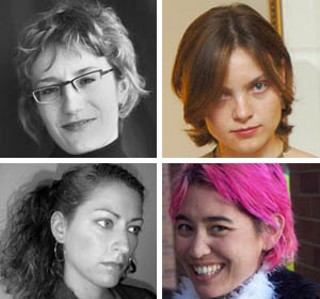 The description for the panel Designing for Global and Local Social Play, which can be found at www.sxsw.com, is a bit inscrutable; for us lay people, it may require a dictionary that hasn’t been written yet. Reading through it while doing research for this article, I was disheartened to find that there were at least five words or phrases I’d never even seen before. I’m no Luddite – nor do I think I’m entitled to know everything – but coming across terms like “folksonomies,” “recommendation systems,” and “glocalized environments” left me feeling somehow out of touch with my generation and unaware of the possibility that I might just be living in a meaningful moment in history. At what point did these terms become a part of our collective vocabulary? And what the hell do they mean?

The panel's organizer and moderator, danah boyd, knows exactly what they mean, of course. boyd, a Ph.D. student in the School of Information at the University of California-Berkeley and a social media researcher at Yahoo!, studies "how people negotiate their presentation of self in mediated social contexts to an unknown audience" through the "emergent social technologies that incorporate social networks, identity representation, sharing, and performance." She spends her time thinking about just such convoluted words and ideas and about how identities and relationships are created, proliferated, and mediated in the so-called "public world" of the Internet.

Joining boyd on the panel will be Irina Shklovski, a Ph.D. student and researcher at Carnegie Mellon University in Pittsburgh, and Amanda Williams, a Ph.D. student at UC-Irvine, both of whom specialize in the study of human-computer interaction and its effect on social environments. "Increasingly, computers have been moving off of desktops and out of offices and into homes, cars, personal effects, and public places," Williams says. "We're asking questions like: What are computers good for? What are they bad for? What new practices and norms do new technologies enable, and how do these practices come about?"

The fourth panelist, the rock star of the group, is Jane McGonigal, whose work as a pervasive game designer for 42 Entertainment has won her numerous awards and a reputation in the world of digital entertainment and performance art. Her work on such massively multiplayer immersive games as The Go Game and I Love Bees (both of which required players – armed with mobile devices, wireless communication tools, and sensing technologies – to engage in acts of high adventure and problem-solving in the actual physical world) has helped redefine conventional notions of social context and space and blurred the lines between the "real world" and the "virtual world" of sit-at-home Internet video games. Her games have helped define "play" in our "Mobile culture."

So, everyone's accounted for. Now what about these phrases they're throwing around? These "folksonomies," "taggings," and "flattened social structures"? For answers, I turned to boyd.

"At [its] core," she says, "language is cultural. It has nothing to do with location – it has to do with the fluidity of social connections."

Okay, so, in a socially fluid world like the Internet, where information is flying around unprotected, waiting to be snatched up and used like so much scratch paper, definitions of social relations are always changing, so vocabulary has to change to keep up. "Taxonomies," for example, are top-down classification systems, wherein objective data and reasoning dictate meaning and context. "Folksonomies," on the other hand, are classification systems that are inherently malleable and collaborative, personal and ever-shifting, based on idiosyncratic experience and free-association, even on something as notoriously unreliable as emotion. There's something democratic, even populist, about these folksonomies, just as there's something democratic and populist about the Internet itself, with its "glocalized environments" (like CraigsList), its "social interaction systems" (like MySpace), and its "pervasive games" (like The Go Game).

Not two weeks ago, I had never heard of any of these phrases, much less the women who will be using them so casually on March 11. So I'm thinking this panel could be good for me, possibly even enlightening. danah boyd herself threatened me with the possibility of "something not quite expected." I don't know what is quite expected at one of these panels, honestly, so I'm not exactly sure what she means. But there may be something to it.