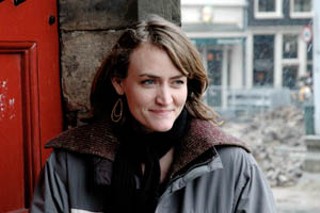 Heather Armstrong is probably the world's premier personal blogger. Her site, Dooce.com, logs a million unique visitors every month, won three Bloggie awards in 2005, spawned a profile of Armstrong in Glamour, and coined an epoynmous entry in the Urban Dictionary: To be "dooced" is to lose one's job as a result of blogging about it. She's the most linked-to personal blogger on Technorati's Top 100 at the time of this writing. At No. 15, Dooce outranks Gawker, Fark.com, Wonkette, Engadget, and the Superficial.

But if you read Stuart Luman's "Linkology," a short piece tracing the connections between the world's 50 most popular blogs in last week's New York Magazine, you'll find a hand-patting description of Dooce: "The public suffering of a postpartum depressive. Mommies everywhere seem to relate."

Armstrong went public online about her struggles with depression after the birth of her daughter, but her site, which launched in early 2001 with a post extolling the virtues of Carnation milk, is about more than motherhood. It's about everything else, too: work-life balance, living without religion, TiVo, R. Kelly, celebrity sightings, Hermann Maier, marriage, and smoking pot in Amsterdam. Dooce conflates the personal and public, which might just be why it addicts so many of its readers – and makes others absolutely furious.

From her home in Salt Lake City, where she was preparing for her appearance as one of SXSW Interactive's four keynote speakers, Armstrong talked about her hate mail, the pressures of going pro, and making motherhood visible online.

Austin Chronicle: You're doing the keynote this year with Jason Kottke [of Kottke.org]. What can people in attendance expect to hear from you?

Heather Armstrong: I think it's supposed to be a conversation between two professional bloggers who've gone about it in completely different ways. Jason is a male who writes about technology and pop culture and design, and he rarely ever goes into anything personal on his Web site. And his is a subscription-based model, whereas mine is informed by a feminine perspective, and mine is very personal, and mine is ad-supported. [The speech] is about those two viewpoints coming into contact, if not clashing with each other in front of a large group of people. [Laughs] I'm going to talk about what it's taken to get us to this point and what it takes for us to do it on a weekly basis – the conflicts that it's caused with me and the pressure. It's been fulfilling, but it's also been really hard.

AC: What are the hard parts?

HA: There is an inherent pressure on me as the breadwinner for the family, and I get an enormous amount of reader e-mail every day. Especially since I've gone quote-unquote professional, people have really defined opinions about what I should and shouldn't be doing, and a lot of people think that if I don't post for a day I'm not upholding my end of the bargain. Someone actually used that in an e-mail to me. I wasn't upholding my "end of the bargain." Although she did go on to say that it's "a bargain I've made up in my head that you don't know about." [Laughs]

AC: Has anyone responded positively to your pro status?

HA: When we first did it, there was the initial swing of backlash, and any major Web site that's done this has experienced that. BoingBoing got it bad. The backlash was huge for them, but everyone got over it. Initially, the same thing happened to me. People came out of the woodwork to tell me what a horrible decision it was. My husband witnessed for the first time just how bad it can get. [Readers] were attacking him personally because he factored into why I decided to [run ads]. He was in a really unhappy job situation, and I thought, "If I can do this for him, why not?" But when I talked about why I did it, that I was experiencing some of this negative feedback, I got thousands of e-mails from people telling me, "I have no idea what the big deal is. You put ads on your site, but you're still the same Web site that I love to read." The negative feedback was probably two percent.

AC: I've read about your kitchen remodel, your frequent constipation, everything. Is anything off-limits, or do you just warn your dad first?

AC: And is not writing topically or about politics a personal choice or an aesthetic one or some combination of the two?

AC: It seems like you've evolved over the years from "single high tech professional in L.A. who runs into actors at the grocery store," to "crazy housewife in Salt Lake City" – a term I don't use pejoratively. Are you more notorious as a fired blogger or as a crazy "mommyblogger"?

HA: Definitely most of the press is about me being fired for my Web site. But, of course, there's the New York Magazine piece: depressive mommyblogger who mothers everywhere somehow seem to relate to. I think the longer I do this, the more I'll be a crazy housewife. [Being dooced] is old news. If you look at the content on my Web site, the entries that I wrote that got me fired are less than one percent.

AC: As dismissive as journalists, especially New York journalists, seem to be about blogging, they reserve a lot of their ire for mothers who blog.

AC: Last year, David Hochman wrote in the Times that mothers' blogs are an "online shrine to parental self-absorption." And The Independent referred to "the apparently irresistible urge to record and share a child's developmental milestones, from first bowel movement to first day at school." Why the hate?

HA: I really don't think they understand. I didn't understand, when I didn't have kids, the need to share and the need to reach out and the need to speak about it. I've never done anything as isolating in my life as staying home with a child. There's so much controversy over what's worthy to record and what's not, and I don't see how chronicling any of your child's life or what it's like to stay home and raise a child isn't valid. What else could be more important?

AC: I stumble over the part where blogging has to be important. It's personal publishing. It gives the author clout in making editorial choices.

HA: A blog for a college student who's trying to keep in touch with his family back home is just as valid as someone who blogs for Microsoft and wants to keep the customer informed of what's going on. To me, there is no difference in validity there.

AC: Since you mentioned isolation, it seems like new media is a solution to that. How else are you going to find parents who are willing to talk about the scary parts? You can't just walk up to somebody at the park and start talking about it.

HA: You can't. And I don't know very many women here with kids – although Utah is heavily populated with women with kids – but there were times when I was alone in the house for nine hours a day with my child, and she couldn't talk to me, and she couldn't provide any meaningful interaction in a sense, and I couldn't get her opinion on anything. During the day, being able to read e-mail or read someone else's Web site saved my life. I really do believe it did. I held on because other people were telling me it was completely normal to feel this way.

AC: Yet, we're not supposed to write about our experiences, because it's detrimental to our children.

HA: Notice they don't say that about daddy blogs. It's so much more heroic that a father would record the details.

AC: There's also this notion that it's about the child instead of about the entire context in which a person raises a child.

HA: I think it's about the story. I'm not rewriting parenthood. I'm not writing a story that's much different than millions of stories that have already been lived, but what's different is how I'm telling it.

HA: I'll have a topic I want to write about, and I'll have one or two sentences that I thought about before, but the rest comes out right then. There's pressure that every entry I write has got to be really well thought out and really well written, just to maintain the brand. It used to be getting online and posting a paragraph about "okay, this happened today, and I saw this on television," and now it's much more of a crafted story. Even if I write just one paragraph, there has to be a kicker in there. Over the weekend, we'll have six or seven experiences that are worth writing about, and I'll choose one of them on Monday and sit down, and it takes an hour or two.

AC: What makes a particular experience worth writing about?

HA: I'm not sure. Something that resonates with me. I honestly do think about whether my husband's going to find it funny. Would he want to read this? Would my brother want to read this? I'm thinking about specific people in my life who are reading this and going by what they find interesting, and that's how I gauge things.

AC: Since so many people blog about parenthood and its trappings, why do you think Dooce is so popular?

HA: I've been asked this question a lot. A lot of it has to do with consistency. I write a lot, and I think it's consistently really good. And I do think the way I write about things speaks to a broad group of people. It doesn't just speak to the tech geeks, it doesn't just speak to the moms, and it doesn't just speak to a small group of political junkies. I get a lot of e-mail from college men. "I can't believe I'm admitting this, but I'm in college, I'm 19, I have nothing in common with you, but I cannot stop reading your Web site." Those are my favorite e-mails because it makes me feel like I'm doing it right.