How WEFAIL has succeeded while spending way too much time online 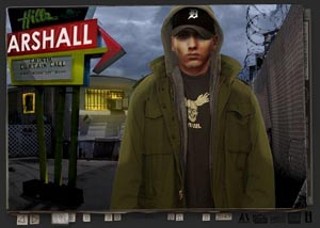 AMLI Downtown: The au courant 2nd Street District is disorienting me, a postmodern mélange of polished concrete and gleaming corrugation. I'm joking with my interview subject, Jordan Stone, breaking the ice as we wind along the AMLI's ground-floor retail, exposed pipes and awning intermingling with the scaffolding and construction above, sheet metal cascading down the condominiums' façade. I tell him its futuristic look prevented me from discerning if the building housing his condo was finished or not – it is, for the most part – but we ultimately agreed that the look wasn't a bug, it was a feature.

Rough edges run through the work Stone and overseas partner Martin Hughes unleash as WEFAIL – as a feature. With a skeletal toolbox (Photoshop, Macromedia's Flash Web animation program, and a pirated audio program) and no formal training on Stone's part, WEFAIL has become Austin's enfant terrible of Flash Web design. With broadband Web connections more utility than luxury, and processor power doubling every 18 months, Flash is ubiquitous on the Web. And WEFAIL is there, smirking.

When my time came, however, I dreaded my "tryst" with Jordan, "tryst" the piss-taking term he insisted on describing our meeting as in one of several e-mails. He wouldn't talk on the phone. It was e-mail only. And, when I received my responses, they often went like this:

How do you break down the work between the two of you?

"We [use] Google Talk a lot, which usually goes like this:

'I can hear you, are you getting me?'

'What's that noise? I can hear static? Is your mic on full volume?'

In person, unencumbered by pseudo-anonymity, Stone was unassuming and forthcoming. Somewhat social-phobic, also; he thought his new, not-inexpensive digs at the AMLI, financed by his increasingly in-demand work, would lure him outside the condo into downtown's rhythms, but it hasn't yet. Not even newfound proximity to his favorite bar, Oilcan Harry's, has succeeded in pulling him out of the high-rise. For someone with a ring on his finger, Jordan's tried hard to "gay up" his relationship with Hughes, his partner across the pond in Manchester. Their presentation for the Web animators' conference Flash Forward, titled "Fuck a Flash Forward" (www.wefail.com/twats), saw the duo bare-chested, dispensing misanthropic advice to aspiring designers, following an animated introduction of the pair grinding to Erasure.

The juvenile angle is one of the pair's self-mythologizing antics. The reality's a little different, however; they met on an online Web design message board, bonding over vitriolic critiques of lesser sites. Around the same time, Stone, transplanted from Houston to Austin in 2001, began designing a site for local clothier Best Dressed Kids. If that sounds as exciting as a pair of OshKosh dungarees, BestDressedKids.com will dissuade you of that notion. A map in a corner of the screen lets browsers tour the globe (and BDK's fashions), yet the site overwhelms. A panoply of images crowd the screen, like a well-scrubbed, photorealistic Hieronymus Bosch, while children model the clothing. But they're not static – they're breathing. Stone imbues his figures with subtle, twitchy motions that give the impression of movement, a trademark he's loathe to call his own, yet one that's unmistakable.

After a trial-run collaboration, HungOut.com, Stone and Hughes launched their flagship site, WeFail.com, a narcotic, low-res nightmare. Viewers can simply watch the hilarious grotesqueries unfold in front of them, such as a mutated Hughes accosting by Officer Stone, or travel along the deceptively simple time line at the bottom of the screen. A seasick soundtrack of Judy Garland and the Geto Boys lends to viewer dislocation, while corrupted speech files take the place of text. The site proved that the duo could manage the time-zone differential. "It really works to our advantage," Stone explains, "because you wake up, and someone's carried the ball across. I'm gonna try to do something to make him laugh when he wakes up. ... If there's a thread that goes through our work, it's making each other laugh."

Word traveled locally, ultimately drawing the attention of Bob Schneider, for whom they created BobSchneiderMusic.com. Stone and Hughes also made the video for his single "Captain Kirk," with Schneider sporting a WEFAIL T-shirt beneath his blazer when his head isn't superimposed on Marilyn Monroe, Muhammad Ali, or the titular scenery-chewer.

"Bob Schneider was a great site and a great first client," says Stone via e-mail. "He didn't care and let us run. So [it's] important for the fact that we were able to rock the cock right off that site in exactly the manner we saw fit." Hughes elaborated, somewhat dubiously, on Schneider's payment plan: "He took us into the desert one night," he writes, "and was like, 'OK boys, the tour starts here; we're about to go through the Bob tunnel. He then pulled out some pan pipes and a Nicaraguan lizard and made us smoke its ass. Crazy days."

Schneider's Lonelyland bandmate Billy Harvey followed suit, commissioning BillyHarveyMusic.com. It begins with the disheveled rocker delivering a video greeting, only to repeatedly flub his lines. It's not the strangest thing going on, either: Harvey's face is superimposed on a purposefully rough paper cutout of his head, while he shuffles through Polaroids of his pad. It's only after a few minutes you notice his furniture and amps in the pictures are also cutouts, photographed, de- and reconstructed by Stone with his bargain-basement digital camera. The two popular pages drove traffic to WEFAIL; Stone's own site, SoFake.com (a vertiginous destination wherein one pushes further and further inward); and Martin-H.com (Hughes' own site, an increasingly askew riff on the traditional design firm's page). They also won SXSW Interactive's music site award two years in a row.

"If there's any justice," Stone says, they'll take home a third for Eminem.com this year. Interscope Records approached the duo with the request and little guidance, save the proviso that it was needed posthaste. WEFAIL was sent some 500 pages of magazine articles, notes, and pre-existing materials. Then, they were let loose. The result dismantles the Eminem/Slim Shady/Marshall Mathers trifecta, traveling along a time line from his trailer-park roots to a corpulent future. Stone says there was online sniping from other Flash hounds that the navigation was too reminiscent of WEFAIL, yet he defends the connection as the result of the two being "rolling" sites. "If you just leave it put (let's say you've got no hands and your helper monkey has taken the day off) then the site will still function somewhat interestingly in a noninteractive fashion," he writes. "Funny thing is, those two sites are the only [sites] I know of that function like that. ... Personally, I can live with two dope sites functioning with similar mechanics."

It's patently ridiculous getting bent out of shape over only two sites on an expanse so limitless, so futile to encapsulate. Still, such discord is symptomatic of the Internet dementia brought about by being jacked into your computer far too long to be healthy. I'd previously asked the pair if they had their own name for this kind of thing. The answer, courtesy of Hughes, was "nerd burn." Have the flames enveloped Stone? Or has success on his terms led to happiness? "I guess I wouldn't say no," he says. "You have no perspective on your own life. I guess so! I don't know how to answer that."