Reacquaint yourself with one Paul Walker, the Jean-Paul Belmondo of the New Preposterousness 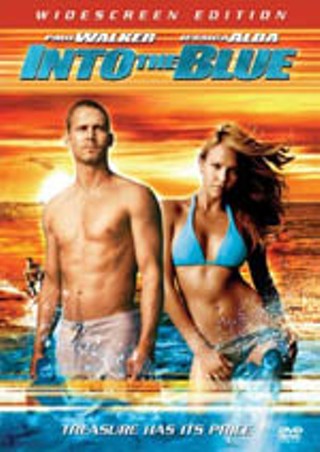 My friend Lee refers to Paul Walker as the Jean-Paul Belmondo of the New Preposterousness, a movement in action cinema pioneered by auteurs like Michael Bay and the screenwriter Matt Johnson (of this film and the astonishing Torque) in which the purity of outrageous spectacle is so confounding to plot, psychology, and physics as to lift off into giddily poetic abstraction. Characterized by vacant eyes, cheerfully bewildered mien, and a distinctly floppy carriage, tripping and bounding about the frame in a uniform of skater T-shirts and cargo shorts, the Paul Walker presence (at zenith in 2 Fast 2 Furious and nadir in Timeline) becomes the ultimate expression of the style through subversion so total as to push beyond any imaginable absurdity. Because no matter how slaphappy the narrative or psychotic the montage, nothing trumps the fugue state induced by seeing a badass action hero as played by a golden retriever puppy.

So, imagine my surprise at Walker's credibility in a rip-off of Peter Benchley's The Deep that looked to be a distinctly preposterous vehicle for Jessica Alba's ass. That luscious posterior is present, accounted for, and flaunting a bikini wedgie that strains the limits of the PG-13 rating in the underrated Into the Blue, but it's simply one of many pleasures to be found in this generously entertaining and handsomely shot aquatic thriller in the mold of an old-fashioned action B-picture. Resourceful B action director that he is, John Stockwell (Blue Crush) turns his limitations to advantage, playing Walker's Tiger Beat goofiness for earnest confusion and not a little pathos as a suitably inappropriate and reluctant action hero. Don't get me wrong: This is no Heath Ledger-esque career turnaround, but Walker all of a sudden makes sense as a poor and well-meaning treasure hunter drawn into trouble by the discovery of the pirate shipwreck he's always dreamed of ... just down the reef from a crashed airplane full of cocaine. Sure, he wants that treasure, but at the end of the day, the only action he's after is a frisky canoodle with Alba back in their houseboat, and who could blame him?

With an unruly Scott Caan on board to loosen everyone up and extensive use of nonprofessional Bahamian locals, the performances throughout are breezier and more lived-in than we have any right to expect from a 110-minute ogle at pretty people in swimsuits that could easily settle for lazy "so bad it's good" camp. If the plot is about 15 minutes too twisty, it's also refreshingly unpretentious, lightly circling moral dilemmas properly scaled to the action in downtime from the gorgeous underwater sequences, pleasingly geometric violence, and some really sweet shark attacks. The disc's package of extras is appropriately perfunctory (c'mon: Rules of the Game, it ain't) and includes a "featurette" obviously constructed from electronic press kit parts, some really awful-looking screen tests, and a commentary from Stockwell, in which the contractually obligated director owns up to some of the more gratuitous, Larry Clark-ish camera angles and drops a nice tidbit about how producer Peter Guber wanted a shot of sharks swimming through a cloud of coke, which surely would have been a surreal vision of Hollywood dreaming itself had only the big fish been dumb enough to cooperate.

Reel Paradise (Fox Lorber, $24.98, Feb. 14): The Pierson family – John, Janet, Georgia, and Wyatt – find that showing free movies in Fiji is a little more complicated than they thought. Now with an alternate ending! For our past coverage of the charming yet challenging film, see austinchronicle.com.

The Island (Dreamworks, $29.99): Thrill to the psychodrama of Michael Bay restraining himself for half a movie of serious science fiction about "important bioethics issues of our time" before he can't help busting out with a ridiculous car chase where train axles get tossed into oncoming traffic. Dude.

Into the Blue, Sony Pictures