At Sundance, the proving ground just got a lot more slippery 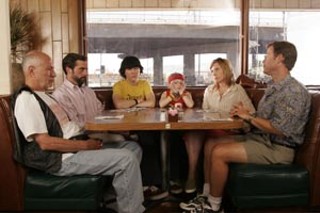 You expect the hordes of filmmakers and movie executives, actors, critics, and publicists. But sometimes you just have to marvel at an event that can attract both scenesters like Paris Hilton and politicians like Al Gore – albeit not at the same events, but at least breathing in the same heady 7,000-foot-high atmosphere of Park City, Utah, the resort town that becomes home every January to the annual Sundance Film Festival. 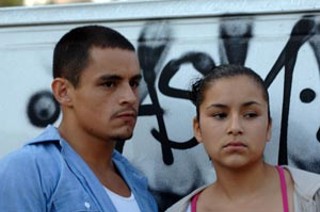 Hilton was there, presumably, to party and collect the much-heralded swag that is available by the armful to celebrities at impromptu boutiques set up by companies wanting to commingle their brand with everything hip, new, and experimental. Gore, on the other hand, was there with his wife Tipper in support of the movie An Inconvenient Truth by Davis Guggenheim, a documentary about global warming that provides a cinematic showcase for Gore's traveling presentation about the long-term effects of global climate change and his personal search for meaning in the aftermath of the 2000 presidential campaign. Quite possibly, the most ubiquitous piece of festival swag was a photo of oneself posed with the former vice-president, who was amiable and always ready to pause and smile for any digital camera pointed in his direction.

For most plebeians attending the festival, the only true swag we take away is the experience of watching the movies. Sundance provides a glimpse of the indie film horizon, a preview of things to come. Some of the distribution companies use the festival as a springboard for the eventual rollout of their already acquired films. However, most of the films screen without distribution already in place and arrive stag at the dance, hoping to find a distribution partner willing to take them for a spin on the national dance floor. At best, the viewer sees at least one thing that knocks her (often double-layered) socks off, something that looms as the quest's holy grail.

Despite seeing several very good movies, I don't think I ever found the grail at this year's Sundance. However, in all fairness, it must be said that there were many films that I was curious about and did not get to see due to inevitable timing and scheduling issues. In fact, two of my personal festival highlights have to do with music opportunities rather than movies. The first event on my schedule after arrival was an ASCAP music showcase by my new current addiction Rufus Wainwright, whose music is featured on the Brokeback Mountain soundtrack. Wainwright was in town to help promote the film Leonard Cohen: I'm Your Man, which I had already seen in Toronto last fall. The film by Lian Lunson presents a portrait of the songwriter and poet that is interwoven with a tribute performance of Cohen's music by such luminaries as Wainwright, U2, Nick Cave, the McGarrigle Sisters, and Beth Orton. Wainwright's transcendent showcase was preceded by one from another singular artist, Imogen Heap, the one-woman band whose music is featured on the soundtrack of a previous Sundance debutante: Garden State.

My other music moment has to do with getting up close and personal with Neil Young, who was in Park City to promote his Jonathan Demme-directed concert film, Neil Young: Heart of Gold. I'll spare you the report here since you'll be reading plenty about Young in these pages during upcoming weeks, as he's scheduled to deliver the keynote address at SXSW Music in March and hopefully screen the film – which is a beautiful coalescence of the simplicity of Demme's and Young's individual styles. 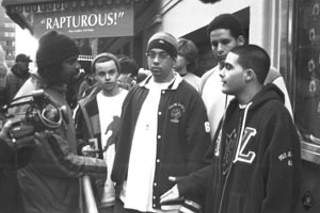 Beyond Beats and Rhymes: A Hip-Hop Head Weighs in on Manhood in Hip-Hop Culture

Most of the other music docs at the fest failed to impress, although Beyond Beats and Rhymes: A Hip-Hop Head Weighs in on Manhood in Hip-Hop Culture by Byron Hurt stood out for its challenging approach to the arch masculinity that is endemic to hip-hop. The Beastie Boys seemed to be everywhere promoting their concert documentary Awesome: I Fuckin' Shot That! by Adam Yauch's pretentious nom de cinema Nathanial Hörnblowér, in which 50 concertgoers were given cameras and instructed to film everything they saw during the whole show. Maybe you need to be a fan to appreciate the movie, but the only thing it reminded me of was the adage about how a great work might be produced if a thousand monkeys were given a thousand typewriters: Let's just say the film is no Shakespearean epic.

American Hardcore by Paul Rachman squanders the energy of the movement with a series of talking heads, while 'Tis Autumn: The Search for Jackie Paris by Two Family House director Raymond De Felitta intrigued with its information about an unknown artist's self-sabotaged career but failed to deliver on any artistic level. Another film, The Proposition, is not a music doc, despite boasting a script by musician Nick Cave. It's an Australian Western, rife with physical and emotional violence, directed by former Cave collaborator John Hillcoat, featuring terrific performances by Guy Pearce and Ray Winstone.

As the festival opened with celebratory remarks about the 25th anniversary of the Sundance Institute, the parent organization that sponsors the festival among numerous other initiatives, this year's lineup was hailed by founder Robert Redford and Director Geoff Gilmore as a "return to roots," meaning that the programmers viewed their selections as having more in common with Sundance's earlier reputation as a proving ground for edgy, experimental work than with the influx of low-budget commercial wannabes that have stood out in recent years. The festival's initial film sales tell a different story. Buyers are still looking for commercial product. The first film to sell was the hotly contested Little Miss Sunshine, directed by Jonathan Dayton and Valerie Faris from a comedy script that has been kicking around for a while. However, it took the combined star wattage of Greg Kinnear, Toni Collette, Alan Arkin, and new A-lister Steve Carell (in post-40-Year-Old Virgin mode) and the directors' winning execution to move this comedy into the "Sold" column. This sale matched the $10-million-plus record highs of two previous films – Shine and The Spitfire Grill – which both proved disastrous at the box office for distributors. Little Miss Sunshine will hopefully not share the same fate, although I personally suspect that the thin altitude of Park City and competitive bent of some distributors might have driven this pleasant but undistinguished film's asking price beyond what the realistic market will bear.

Documentarian Kirby Dick made a splash with This Film Is Not Yet Rated, in which he hires a couple of private investigators to spy on Hollywood's supersecret ratings board: the MPAA (the Motion Picture Association of America). He traces some of the organization's history as the brainchild of former MPAA head Jack Valenti and amusingly presents his frustrated attempts to get inside the agency. The project is a real rabble-rouser, and Dick's effort must be applauded, even though I wish the film outlined more of Hollywood's sorry history of self-censorship. Another documentary stalwart and veteran cinematographer, Haskell Wexler, was at Sundance with his eight-years-in-progress film Who Needs Sleep? Agitating in his own way, Wexler presents a passionate argument for the end of 16- and 20-hour workdays in Hollywood, which many argue have already proved fatal to members of their tribe. (Sleep, incidentally, was the subject of two other festival movies, Michel Gondry's quickly purchased The Science of Sleep and Alan Berliner's typically personal documentary Wide Awake, about his lifelong struggle with insomnia.)

In a unprecedented result, the audience bestowed awards on the same two films as the dramatic and documentary juries. What this means, if anything, is up for conjecture, and may not become apparent until sometime in the future. What is immediately evident is that both titles are multicultural stories. The dramatic winner, Quinceañera, directed by Wash Westmoreland and Richard Glatzer, who are better known for their humorous gay films, and produced by Far From Heaven's Todd Haynes, is a portrait of L.A.'s rapidly gentrifying Echo Park neighborhood and its largely Mexican-American population. Among the film's central characters are a pregnant 14-year-old girl and a gay cholo who have been banished from their families. The documentary winner, God Grew Tired of Us by Christopher Dillon Quinn, records the story of a group of Sudanese "lost boys," who emigrated to the United States. Neither of these films had sold by the time of this writing. For all the talk of getting back to roots, the business of Sundance still keeps the slippery slopes at arm's length.

Sundance Film Festival, Quinceañera, God Grew Tired of Us, Wide Awake, The Science of Sleep, Who Needs Sleep?, This Film Is Not Yet Rated, Paris Hilton, Al Gore, Robert Redford, Geoff Gilmore, Little Miss Sunshine, Neil Young:Heart of Gold, American Hardcore, The Proposition, Awesome! I Fuckin' Shot That, Beyond Beats and Rhymes: A Hip-Hop Head Weighs in on Manhood in Hip-Hop Culture