Punk, Puppets, and Manson as Messiah 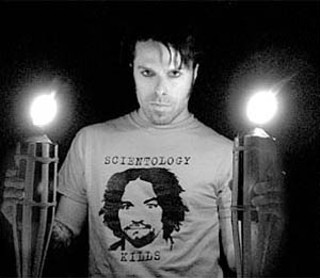 After a grueling two years behind the camera, Los Angeles-based filmmaker John Roecker is finally unleashing Live Freaky! Die Freaky!, his jaw-droppingly outrageous feature debut, upon a public already up to its pinpoint pupils in black body-bag humor and anxiety. Expect mid-to-light shrieking followed by nervous but giddy laughter of the cathartic kind, with the possibility of exploding Pat Robertsons and sporadic questioning of authority figures. Just as planned.

But let's cut to the creepy crawl: Live Freaky! Die Freaky! is an animated musical comedy horror film about the Manson Family and their effect on our as-yet-unborn children's children's children. There are drugs and pain and sex and death throughout, not to mention enough scatological gore to gag both Eli Roth and Jim Van Bebber combined.

Wal-Mart has made it known that it will decline to stock Roecker's film, an honor despite itself and one that speaks volumes about Roecker's talents.

Roecker spoke to the Chronicle from his L.A. home during the afternoon after the morning after of the very long night before.

"We had a premiere party last night and Rancid played with John Doe," the gravelly filmmaker says, "and I really need to wake up, so, you know, sorry." Austin Chronicle: Why a claymation musical-comedy-nightmare about Charles Manson? Why now?

John Roecker: He's been the bogeyman for the longest time – since I was a kid – and there have been so many comparisons between him and Christ, you know? So, I just took it to the next step by saying, well, what if in the distant future [Vincent Bugliosi's book] Helter Skelter was rediscovered by people who had no idea who Charles Manson really was and who then come to view him as the messiah? I doubt the Bible is very accurate about the life of Christ, either. Manson's the man who's responsible for "killing the Sixties." He really knew how to play up the whole "most dangerous man alive" thing when at the time, the most dangerous man alive was Richard Nixon. And Henry Kissinger. Why he's not in jail I'll never know.

AC: So, then, why animation?

JR: I always wanted to make this look more like a children's film, like the old Rankin/Bass holiday shows I grew up with. I'd always envisioned it like that and, plus, there was no way I was going to have my friends, you know, have sex and do those naughty things in front of me. The puppets worked out pretty fine. They didn't bitch when they had to work overtime.

AC: That's not bad for a stop-motion feature that was repeatedly turned down or out by assorted film labs.

AC: How has audience reaction been? Any bloodshed or gnashing of teeth?

JR: It's funny, because a lot of the kids who are there to see the film don't even know who Charlie Manson is. And I'm cool with that, because that's not the point of the movie. The point is for people to think for themselves. People who follow a leader and kill in their name – be it Charles Manson, L. Ron Hubbard, or Jesus Christ, or George Bush – well, to me that's pretty sickening. Stop killing for this thing that may or may not exist.