Anything Can Happen: Jon Favreau and Dax Shepard on Zathura

How this Jumanji requel took to the stars 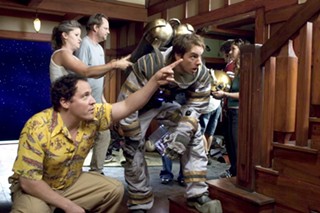 Jon Favreau and Dax Shepard on the set of Zathura

At any given moment, Hollywood's output is as rife with seemingly bizarre improbabilities and their attendant uncertainties as anywhere in the known universe, so much so that you've got to wonder if Heisenberg's notorious principle ought to be banner-headlined daily atop Variety's masthead: "Swingin' Elf to Helm Jumanji Requel – Says 'Guy Named Dax Made Me Do It!' (for the Money, Baby?)."

But then measuring both the position and velocity of Jon Favreau's career with any degree of accuracy short of heading down to your local schoolyard to cast your lot with the neighborhood's floating jacks game is a losing battle at best.

Seriously: Nine years ago, what bookie in his right mind would have put better than a-zillion-to-one odds that the star of the sex-mad indie smash Swingers, the director of Elf, and the co-producer of Green Street Hooligans (a film in which Elijah Wood transforms from Frodorian savior to bloodthirsty West Ham United "supporter") would come to direct an interstellar family film adapted from the works of Chris van Allsburg (The Polar Express, Jumanji)?

But Hollywood loves those against-all-oddities, and Favreau's energetically eye-popping space case is – thanks in large part to a surprisingly affecting turn from Ashton Kutcher's Punk'd cohort Dax Shepard – a triumph of Saturday matinee moviemaking, the kind of adventurous outing that both parents and offspring will find painlessly entertaining. It's popcorn art minus the mental-molar-shattering kernels of hard brown malarkey.

The Chronicle spoke to Favreau and Shepard at the Austin Film Festival to discuss the pros and cons of holiday filmmaking, giant robots, and why being scared is a good thing.

Austin Chronicle: I think the thing that audiences are most going to dig about Zathura is just how many Saturday matinee genres you've managed to combine, you know?

Dax Shepard: When I was reading the script, there were moments from there where I thought they were almost from another movie, not Star Wars, but –

DS: The music has that "duh-duh-duh-DUHHH!" kind of tone to it, totally.

JF: That's really when you know you're almost home on a movie, when you're on the scoring stage, because you're pretty much done and then you hear the musicians playing it live, while watching your movie, and that's when I brought my kids down because we were on the back nine at that point.

AC: What do your kids think of the movie?

JF: We were actually listening to the temp mock-up of the score that [composer] John Debney was doing, and in his studio he does all the different instruments with a synthesizer and then records that and gives it to you to take notes on. Anyway, [my daughter] was watching the scene where the robot is trying to pull his arms out of the wall, and the accompanying music is very scary and so she was, like, scared of it and wanted to see it over and over again even though it terrified her, and now all she wants to do is talk about the robot.

AC: And now you get to take the robot home to taunt her with.

DS: I had gone to a test screening with Jon where they asked parents if they thought the film was too scary to recommend, and I wanted to stand up in the middle of the audience and remind them that being scared is really fun, and it's part of being a kid. I mean, why are there amusement parks? Why is this some kind of a pejorative about being scared in a movie? I just don't get it.

JF: As long as it's not "nightmare terrifying." ... The studio is obviously nervous about anything that might scare off its crowd, and so during that test screening, when they asked if there was anything that was scary, a bunch of people raised their hands – and I thought, oh, great, here we go – but then the kids began to preface everything with "Well, it was great when ... ." So, as it turned out, they liked it when it was the scariest and the studio, because of that, settled on the movie in the shape it is now. It was a fine line to walk, though, with the scariness, because if it's not scary at all, you lose the adults, you lose the kids, and it becomes a very young, young movie. We wanted to make a movie like, say, E.T., which worked for kids but it worked for grownups, too. That was sort of a paradigm for us.

DS: And Gremlins, too.

JF: But that one's a little scarier than this one. This one is a little more adventurous.

DS: Yeah, but what was cool for me was that the first time I got out of seeing this film, I called my mom and I said, "Oh my god, I'm in a movie that people are going to be renting in 15 years." And it feels so cool to be a part of something that will end up being a part of the texture of this generation. Like Goonies. I rented that right before last Christmas, and it's not a Christmas movie, but I link that film to having originally seen it at that time of year and to me that gets me in the mood for Christmas. And, likewise, I think there will be people who in 15 years will rent Zathura for the same reason. This will be the high-water mark of what a kids movie will be for them. 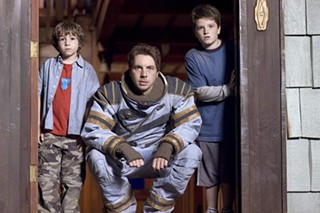 AC: Speaking of Christmas movies, how did Peter Billingsley ["Ralphie" of perennial holiday favorite A Christmas Story] come on board as producer?

JF: I knew him through Vince Vaughn, whom he had met while doing an After School Special years ago, and then I hung out with him after working on Rudy. Vince brought him on to me as a co-producer, and I was really impressed with the fact that he knows every aspect of moviemaking. He's also a co-producer on Dinner for Five for me – he also did a cameo in Elf for me – and then we brought him on to Zathura. There's actually the leg lamp from A Christmas Story in the background of the last scene of Zathura.

DS: He was wonderful to have on this film, especially having been a child actor himself, just the way he could help deal with the kids was really great.

AC: So, Jon, did you and Dax know each other before shooting Zathura?

DS: No, but I would often stand outside of Jon's window, naked, in the rain, with a knife.

JF: He had been a name that had been brought up during casting, and at that point I only knew him from Punk'd, originally. But there's a really cool Mike Judge project that was shot here in Austin that was then called 3001 – now it's called Idiocracy – and I really love Mike Judge and his sensibility and thought, well, if he's working with this guy then this guy must have some serious chops. And Dax also has a background in the Groundlings, the L.A.-based improv group that Will Ferrell ... came out of, and I love working with people who are improvisers but who are also into acting. I share a common language with them, and there's a certain sense of being up for trying things; they're willing to take risks and they don't get precious with takes. An improviser will take the opportunity to outdo what they just did or what the other guy did. There's not a lot of adult characters in this movie, so for Dax to be in there just seemed like it would be an incredibly helpful asset to have. I have pretty good taste.

JF: I trust my instincts.

Zathura opens in Austin on Friday, Nov. 11. For a review and show times, see Film Listings.