One remote to bizarro world 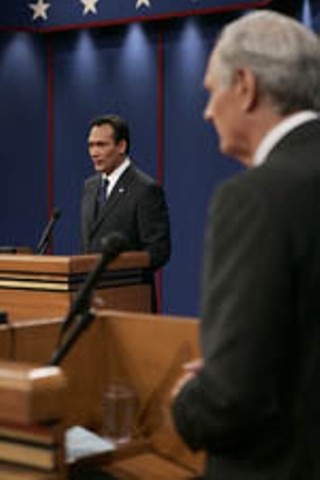 This week, by accident or design, I experienced Bizarro World.

Let me start with the press release I received from the Kinky Friedman for Governor folks. It seems that Friedman and his "circus with a purpose" has caught the eye of director/comedian David Steinberg and director Wayne Miller, who want to follow the "Kinkster" as he goes on the campaign trail for his apparently legitimate run for Texas governor in a reality series called Go Kinky. (I'll take Friedman's run seriously when he names Molly Ivins as his first lady. Hell, they don't need to get married. In fact, if they just roomed in the Governor's Mansion, opening the grounds for Sunday afternoon barbecues and dances, that would be fine with me.)

Apparently, Steinberg isn't entirely sure Friedman is serious with his bid, either. So far, there are only two half-hour episodes of Go Kinky. By the time you read this, they will have aired on cable Channel CMT (Country Music Television). However, the press release promises that the "pilot episodes could lead to a 2006 television series about the Friedman campaign." No news as to whether the two episodes will air again. A call to the Kinky Friedman folks was not returned, and a poke around the CMT Web site came up empty (it is listed in the onscreen programming guide, for you Time Warner subscribers).

Steinberg calls Friedman "a unique cross between Don Quixote, Lenny Bruce and Groucho Marx" and says that Go Kinky will potentially follow "a Texas icon and American original on his outrageous, irreverent quest to be the next governor of Texas ... stepping on a few toes along the way."

Now, maybe it's my natural inclination to despise reality TV, but something about Go Kinky reminds me of W. Lee "Pappy" O'Daniel, who used the then "outlaw" radio airwaves of the 1930s to launch his bid for governor, while selling his biscuits and pontificating on what was wrong with the world and who was doing him wrong. Wasn't having one huckster in the Texas Governor's Mansion enough? On the other hand, and, as the Kinky bumper stickers challenge, "Why the hell not?"

Which brings me to the second, albeit less thigh-slapping moment of Bizarro World I experienced this week: the live episode of The West Wing last Sunday. In this, presidential candidates Matt Santos (Jimmy Smits) and Arnie Vinick (Alan Alda) were featured in the most idealized version of a presidential debate I will ever see, probably in my lifetime.

Early in the live episode, the candidates dispensed with the rigid, backroom-drawn rules that govern real-life presidential debates. That was my first clue that I was entering a big, fluffy fantasy. To burnish the "realness" of the episode, an NBC News logo was displayed in the corner of the screen. The jaded part of me thought, "I sure hope some idiot doesn't think this is real." But another part of me – the weary, angry, what has my country come to? part of me – wanted it. Wanted it bad. Two articulate, passionate, thoughtful candidates, each sure of his ability and desire to run the country. I almost lit one up and laid back languorously on my couch when the episode ended, basking in the glow that these two men, gallantly, and sometimes sloppily, were fighting to win my vote – okay, my fictional vote.

And what about last week's episode of Commander in Chief? It was a precious moment when President Mackenzie Allen (Geena Davis) leapt to her feet after having news of a natural disaster whispered into her ear while she was – guess what? – reading to a group of school children! There was none of that pinch-faced dawdling. No, the Mac graciously and without missing a beat rose to the occasion. I laughed at the sheer audacity of the action, given as much attention as an aside. But, alas, this series, too, is a breathtaking fantasy in that President Allen, besides being a woman, is an Independent, which makes her reviled by the old-boy, two-party system that's been running roughshod on Capitol Hill.

Assuming that Go Kinky gets more episodes in the can, Friedman states in the Go Kinky press release that "People will see what happens when you buck the two-party system in the country and hopefully Texans will get mad enough to do something about it and show the rest of America the way!"

As it's been written elsewhere, before you can make change, you have to imagine it first. If TV – reality programming or otherwise – can offer a glimpse of what can and is yet to be imagined, then, hey, show me the way to Bizarro World.