After an eight-year break, screenwriter Shane Black is back with "Kiss Kiss, Bang Bang,' taking himself in a different direction

"Everyone hated the script," says Black of Kiss Kiss, Bang Bang. "People would send it back to me, often unread, which is very humbling, because I used to have a script and put it on the market, and people would call back the same day." (Photo By Mary Sledd)

Shane Black joked from the Paramount Theatre stage as he introduced Kiss Kiss, Bang Bang – the movie starring Val Kilmer and Robert Downey Jr. that he wrote and directed – that this was the first time since he had begun attending the Austin Film Festival that he actually had a movie to present instead of just schmoozing and getting drunk at the Driskill hotel bar.

Kiss Kiss, Bang Bang, which opens in Austin this Friday, is screenwriter Black's first film in eight years. Moreover, it's the first film he's ever directed, and his first script not to be packaged as an action blockbuster but rather as a modestly budgeted (by Hollywood standards), character-driven story. Before Black's self-imposed absence, he was Hollywood's highest-paid screenwriter, receiving a payday of $4 million for his 1996 script for The Long Kiss Goodnight. Black had helped define the Eighties action blockbuster with his scripts for Lethal Weapon (and story for Lethal Weapon 2), The Last Boy Scout, and Last Action Hero, and, along with Joe Eszterhas, Black's good fortune also helped usher in the era of the blockbuster payday for superstar screenwriters. Black took some time out from the festival to talk with the Chronicle about his first time directing, what he's been doing for the past eight years, and what keeps him returning to AFF apart from the attraction of the Driskill bar.

Austin Chronicle: How was the experience of first-time directing?

Shane Black: The directing thing was a blast. It's just a more social experience. Writing is delightful when it's going well. You feel very excited when things cooperate, and when they don't, it's the loneliest, most hideous, tedious process of sitting alone in a room at 12 midnight and banging your head, looking for an idea. Once you have a blueprint in front of you, you've kind of already decided what you want to see, now you just want to find the best way of presenting it. Given this blueprint, how do I want to see it on the screen? Starting from something is so much better than starting from nothing.

That having been said, there are still times you get actors like Robert Downey and Val Kilmer and you have to know when the boat's steering itself, take your hands off the wheel, and just say, "Guys, whatever. Turn on the camera, I'm going to be over here." Then the task is simply to get as many options as you can so you have choices. But these guys are so quick on their feet that they'll give you the options in 10 different takes. And they really give the lie to the old notion that actors are sort of dumb, that the best actors are emotional but not intellectual. These guys are brilliant, and their minds work so quickly it actually infuses their acting. It completely enhances them and their performance. 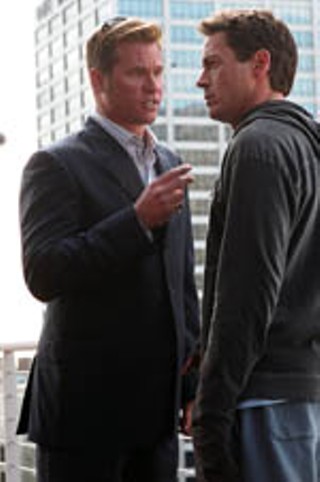 Val Kilmer as Gay Perry and Robert Downey Jr. as Harry Lockhart in the film.

AC: What have you been doing in the eight years since your last picture?

SB: I was getting a lot of attention, but for all the wrong reasons. Someone would come up and say, "Hey, man, congratulations. You did good." And I'd go, "Oh, really? You saw the movie?" And he's, "No, I didn't see the movie, but, man, all that cash. You and Joe Eszterhas." I was starting to lose a couple of friends over that money. They didn't understand why I was getting some and they weren't. And I didn't think there was a serious problem. I felt that's all right. I made some money. So what? It's not going to affect the way people perceive me or the work. But it wasn't the case.

I tried to get into the Academy. At the time, I'd done The Long Kiss Goodnight with Geena Davis and Sam Jackson. The Last Boy Scout, Lethal Weapon 1 and 2, I'd done The Monster Squad, Last Action Hero with Schwarzenegger. They rejected me flat out from the Academy's writers branch and said when you have more credits come back, and we'll let you reapply. Their criteria are that you must have at least two produced works of substantive merit, and according to them I didn't have that. So I couldn't get in the Academy. It really occurred to me then: "Wow, I'm not imagining this. People are really pissed at me because someone wrote me a check." And I didn't even want to do these big movies anymore. I wanted to do something smaller. I wanted to direct something, and I thought, "Man, I just gotta get out of this spotlight that's got me pegged against a wall with dollar signs all over it. I'm gonna make little movies. I want to write again. I want to do stuff that is interesting and I don't care about the money."

I got out of the spotlight. I read and just became invisible again to protect myself and try to write something I'd want to direct. Now, the problem is I ran a little too far, so of course it's like, "Hey, where's the spotlight?," you know? I wanted it back because I overcompensated. But in this case, finally, I've gotten a script with KKBB that I was ready to direct, and that I want to direct. I came back after, like, four years, and boy, it went from getting all the attention for the wrong reasons to getting, "Who are you?" No attention. Every door slammed shut. They said, "Who's this kid? He was gone and now he wants to direct a movie? He's unproven. What's the script? Is it a blockbuster? Oh, it's kind of weird, and it has a gay character." I couldn't get arrested. Everyone hated the script, too. People would send it back to me, often unread, which is very humbling, because I used to have a script and put it on the market, and people would call back the same day. Very humbling. No one remembers who the hell I am, and more importantly, no one likes this script except me, so what am I going to do? I've got to find somebody else who likes it. And thank God that the one immutable unchanging constant – the Rock of Gibraltar in Hollywood – is Joel Silver. He liked the script and thank Christ he finally agreed to make a $15 million movie. Warner's didn't need to make that movie. They're not in the habit of that. And Joel, coming off two Matrix movies that grossed a billion dollars, he didn't need to make it, but he did. So, for that, I'll always be grateful.

AC: Can you go back to being a gun for hire?

SB: I don't know. I don't think maybe I'd want to. I get such a kick out of this directing gig that I think it's something I wish to continue doing, and it's pretty important to me that I direct things I've written myself.

AC: You're in a great position to observe the evolution of the Austin Film Festival, having attended it for practically all of its 12 years of existence. What keeps you coming back?

SB: This festival is a chance for me to meet and reattach myself to why I like writing. I come here and I hobnob with people I pretend to be chummy with and act like their colleague. But in fact I'm still awed by the fact that I've talked with a Steve Zaillian or a Scott Frank or Ted Tally. The best screenwriters in the world come here. James Brooks, my mentor, has been here. And Albert Brooks. I just looked over and saw Harold Ramis walk by. It's a place where I come to be refreshed. I learn as much as I impart. I'd just as soon be a student, sit and listen to the seminars when I'm not doing mine. It's a shot in the arm, a writer's B-12, to remind you: Okay, I'm excited again. I remember why I started doing this.