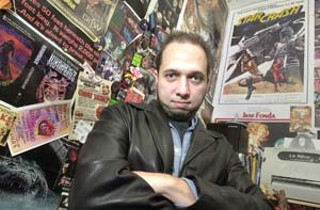 Screenwriter Stephen Romano's house once so unnerved a girlfriend of mine that she left me. No kidding. Sure, there might have been a few other factors involved in the breakup, but looking back, I'm fairly certain the house was the scythe that clove the ruminant's back. It's in one of those funky South Austin neighborhoods where everything feels slightly too close together, and the trees always seem to move of their own accord, breeze or no. Inside, it's wall-to-wall, floor-to-ceiling horror-movie madness: one-sheets, stickers, props, vertiginous stacks of dusty VHS tapes, old copies of EC Comics, and enough gore-drenched sensory overload to give even Forest J Ackerman a nosebleed.

Romano calls it "the Kingdom."

Don Coscarelli, director of the Phantasm cult horror film series calls it "Almost like something you'd find in the movie Se7en." He should know. Not only has Coscarelli been inside the Kingdom and survived to tell the tale but this past summer saw the director and writer-pal Romano head up to Vancouver to shoot what has since turned out to be the debut episode in Showtime's new Masters of Horror series, a 13-episode weekly anthology of hourlong horror films that kicks off Friday, Oct. 28.

The series, produced in part by longtime genre stalwart Mick Garris (The Stand, Amazing Stories), brings together 13 of the genre's best and brightest – aside from Garris and Coscarelli, there's Dario Argento, Takashi Miike, Tobe Hooper, John Landis, John Carpenter, Larry Cohen, Stuart Gordon, Joe Dante, William Malone, John McNaughton, and Lucky McKee – in what can only be described as a horror fan's bloody wet dream. Coscarelli, who in 2002 hit one of the nerviest screwballs ever lobbed a director's way clean out of the part with his ballsy, affecting adaptation of Texas author Joe R. Lansdale's Bubba Ho-Tep, is an old hand at celluloid blood 'n' guts, but for Romano, who's been lurking around the edges of infamy for what seems like forever, it's his first shot at the majors, and, as he enthusiastically puts it, a chance to "work with my heroes."

"I've been pretty lucky, because I'm one of these fans made good," he says, and taking in his cramped, dark living room, that much is obvious. In a town where it often feels as though every day is Halloween – even when Ministry isn't gigging somewhere – Romano's voluminous household crammed full of psychotronic ephemera and his obvious love of fantastic filmmaking does everyone from Ray Harryhausen to Lucio Fulci proud. You can't help but love a guy who's gone to the trouble of not only prominently displaying a poster of Luigi Cozzi's cheesy 1979 Star Wars knockoff, Starcrash, on his ceiling, but who has also written a book – Compromising Hyperspace, it's called – on the same obscure title, a film most mainstream critics would dismiss out of hand if they even bothered to watch it. (You can read excerpts of said book at www.pachanko.com/starcrash/book1.html.)

And now, God help us, he's broken into the movies.

Incident On and Off a Mountain Road, the Coscarelli/Romano collaboration, is adapted from another short by Lansdale, this one sporting fewer supernatural elements – and no sign of Elvis or JFK anywhere at all – and more gut-churning suspense. It's essentially one turbo-charged chase sequence, a battle to the death between an innocent woman and the psychotic madman she accidentally locks horns with on that midnight mountain pass. Without giving too much away, it goes from love story to outright shocker, with pretty much everything in between.

You want to talk about uncompromising horror screenwriting? Take a gander at this block of randomly chosen action from another of Romano's upcoming script projects (producer conniptions preclude excerpting any of Incident ..., sadly), the gonzo Escape From Freak Mansion:

"Kurt is strapped to an operating table of some sort, held down so tight that the leather draws blood on his skin. His face is a mess, ripped open, his left eye gouged out, roadmaps of fresh scars scrawled along his neck and shoulders. A hole has been cut in his stomach and a loop of his intestines are strewn to the ceiling, attached to a rusty wheel that pulls them, a micromillimeter at a time. But he is still alive."

Like Bon Scott said: You want blood, you got it.

The finished film belies the fact that it was shot in 10 days with a budget of $1 million, peanuts by Hollywood standards. Coscarelli's whiplash, fluid direction never once slows down for a breather, and the penultimate sequence featuring a cameo by Phantasm's Tall Man, Angus Scrimm, only adds to the film's overall sense of helpless surreality. It's stripped-down horror filmmaking at its most relentless. There's even a revelatory moment of gag-worthy eyeball violence between a drill press and, well, you've just got to see it for yourself. (Extreme eyeball violence of this sort is worth its weight in ocular jocularity, as both fans of the late Italian horror director Lucio Fulci and the Red Ryder Repeating Air Rifle Carbine of Jean Shepherd's A Christmas Story will surely attest. Mayhem is in the eye of the beholder and all that sort of thing. Suffice it to say, you've been warned.)

"I think I'm in good company on Masters of Horror." Romano continues. "A lot of the writers are die-hard fans direct from the trenches. You've got guys like me, Drew McWeeny of Aint-It-Cool-News, and Steve Niles, an up and coming hotshot in the horror comic business, writing scripts for this show and the producers have pretty much left us alone on this because they have faith in what the directors want, which is, frankly, amazing.

"I didn't go to school for any of this stuff," he says, "so in the case of Incident On and Off a Mountain Road, it's a real special thing, because Don consulted with me on everything on this film, from the casting to the final editing."

For his part, Coscarelli found Romano's hyperenthusiasm contagious: "He made the shoot tolerable for me, really, because I was given this challenge of taking this 14-page short story by Joe Lansdale – which would probably translate to a 15-minute movie – and turned it into an hour show. And some of his concepts in terms of expanding those characters were just brilliant. He's got a real macho writing style."

Macho? Well, maybe. Considering Incident's two main antagonists are cutthroat males, both of whom end up locked in mortal (or possibly immortal) combat with one of Lansdale's trademark tough gals, it's difficult to tell you who, exactly, wins in this battle of the sexes without giving the whole third act away.

Regardless, Romano couldn't be happier. Tonight's premiere is cause for a raucous celebration at the Kingdom and is followed in short order by an upcoming feature film production penned by him and produced by pal A. Michael Baldwin, also of Phantasm fame. At this point, there's scant Romano can say about it except that it involves dead girls and, with any luck, will be shot in Austin. On top of that, there's another Phantasm project in the works with Coscarelli and maybe even some directing duties for Romano himself, who, it should be said, will be leaving the Kingdom behind for slightly less claustrophobic digs sometime in the near future, a fact that should make any number of Austin gore-hounds wax nostalgic. Onward and upward like a spurting freshet of the old crimson, as they say.

"And you know what the coolest thing [about Masters of Horror] is?" asks a grinning Romano. "I'm the guy they made this show for – and here I am writing it."

Masters of Horror: Incident On and Off a Mountain Road premieres Friday, Oct. 28, on Showtime.

Showtime, Masters of Horror, Stephen Romano, Don Coscarelli, Incident On and Off a Mountain Pass