Brothers from another planet 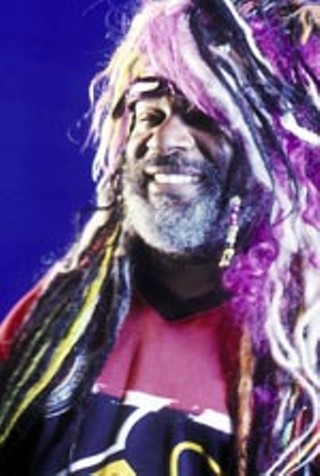 Parliament Funkadelic: One Nation Under a Groove

With the proliferation of supernatural dramas and thrillers featuring aliens out to conquer the Earth, I thought I would come up with a thought-provoking column on how curious it is that, just like in the 1950s Cold War sci-fi movies, we are seeing a similar expression of fear of the big and bad in this fall's TV season. This time it's terrorists, not communists, out to get us. But that all went out the window when I watched Yvonne Smith's Parliament Funkadelic: One Nation Under a Groove. The truly funkalicious film opens the new season of Independent Lens on PBS.

"Free your mind and your ass will follow," the inimitable George Clinton, aka the Godfather of the P-Funk movement, implored. After spending hours watching pensive, paranoia-inducing dramas – Surface (NBC), Invasion (ABC), and Threshold (CBS) – I was reminded of Clinton's call, and all critical thinking ceased. After watching One Nation Under a Groove, all I want to do is dance. Maybe that's not such foolish advice for paranoid times.

When P-Funk hit the scene in the early Seventies, the times were also troubled. Social and political unrest were igniting passions, and poor urban communities, mostly black and Latino, were struggling with identity and race consciousness in a newly radicalized way. P-Funk created cultural pride on a grand, self-affirming scale. P-Funk "expressed the cultural alienation of young African-Americans, creating an alternate universe of 'aliens' bringing the redemptive power of funk to a world sorely in need of a new point of view," Smith's film states.

Linking funk and rock & roll (instead of rock & roll with R&B, which bands like the Rolling Stones were trying to do) created a new sound. But equally distinctive about P-Funk was the mythology, the passion play of brothers from another planet, being as big and bad and loud as they wanted to be. Their concerts – of which there is ample vintage footage in Smith's film – were both pageant and a bold declaration to release oneself from the confines of polite society. More importantly, they were bombastic celebrations of blackness, embracing and, some would say, brazenly claiming space in a larger universe.

Smith gets the P-Funk story told with an animated narrator (cell and computer generated) named Afronaut, named for a P-Funk lyric. Eddie Griffin (Undercover Brother) gleefully voices the sinewy Afronaut, who checks in from time to time to make sure we understand the whole P-Funk phenomena. But it's the Afronaut's entrance in the artist-created, New Millennium version of the Mothership (again, hearkening back to P-Funk mythology) that really sets the show off and lets you know you're heading for one free and funky ride.

Interviews with George Clinton, Bootsy Collins, the late Ray Davis, Dawn Silva (an original Bride of Funkenstein), and other P-Funk musicians and roadies are included. The full impact of P-Funk on contemporary music is revealed in interviews with Ice Cube, the late Rick James, and Flea and Anthony Kiedis of the Red Hot Chili Peppers, among others.

Parliament Funkadelic: One Nation Under a Groove airs Oct. 12 at 12:30am on PBS.

Other October Independent Television Service offerings on PBS include:

The Last Cowboy (D: Jon Alpert): Filmed over two decades, this sometimes startling documentary gives an unvarnished story of a cowboy trying to make it in modern times (cameras up close to bucking horses and other furious livestock will make you grateful to be sitting comfortably in your living room). Set in Porcupine, N.D., near the Pine Ridge Indian Reservation, Vernon Sager stubbornly ekes out a life, minding cows, tending fences, and looking forward to the day when he can ride off into the proverbial sunset. Calluses, broken-down trucks, and thin wallets make this a far cry from the celluloid cowboys many know and love. While offering an honest look into the life, Alpert's film also reveals the cowboy psyche, making it clear why mamas shouldn't let their babies grow up to be cowboys. Airs Oct. 25 at 9pm.