The 1993 film by writer and director Mike Leigh, newly released by Criterion, is a small masterpiece of blighted English negativity: like little body with a corrosive heart 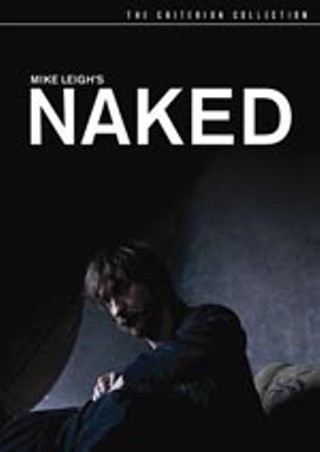 Naked, the 1993 film by writer and director Mike Leigh (Topsy Turvy, Secrets and Lies) newly released by Criterion, is a small masterpiece of blighted English negativity: like little body with a corrosive heart. Starring the brilliant and subtle David Thewlis as Johnny, the angriest of angry young men, Naked is an actor's film, stacked full of conflict and indignation, low drudgery and high wit. The cast is generally excellent, but from beginning to end this is Johnny's movie, and Thewlis makes a feast of it, sounding the vast conflicts in that vagrant's teeming brain again and again with the smallest gesture or word, betraying the beating heart not just of a character, but of a man, rounded and deep. As with most of Leigh's films, the dialogue and action were born out of months of rehearsals and improvisations by the actors (including the excellent Lesley Sharpe and the pathologically victimized Katrin Cartlidge), and consequently the film has a lived-in (though hardly warm) feel to it – you can almost smell the ramshackle London apartment Thewlis' drifter has raided to corrupt with his violent manipulations and battering-ram eschatology. In the hands of a weaker actor (say Greg Cruttwell, Naked's hollow man, for example), the movie would just be an exercise in disaffected, post-Thatcher urban callousness. Instead, Thewlis, who received the best actor award at Cannes for his efforts, rips and tears at himself and builds from parts the full form and shape of a man at war with the world, lost and saved and lost again in the space of a single rant. It's an ageless performance, though bleak beyond bleak, and only by means of the blackest humor does Leigh temper the severity of Johnny's misogyny and intellectual virulence and make them digestible. On this set's second disc, an interview with playwright and filmmaker Neil LaBute (In the Company of Men), no stranger to charges of woman-hating himself, speaks to the gulf that often exists between the artist and the characters he creates, no doubt a defense Leigh had to employ more than once after the release of the film. And a conversation between Leigh and famed British author Will Self, filmed for BBC, is erudite enough as to be almost incomprehensible, absent a graduate education in literary theory from Oxford, or a street beating in Manchester.

The Hitchhiker's Guide to the Galaxy (Buena Vista, $29.99): Hard to find fault with a movie starring Martin Freeman and Mos Def, but it's there if you look for it.

Batman Begins (Warner Bros., $30.99): Another story of an angry young man looking for psychological restitution from the world. This one involves tights, though, and some sort of poison gas.