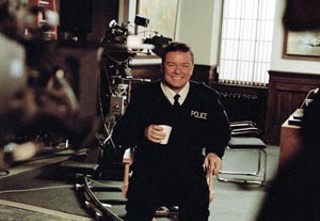 I have a friend who insists that when it comes to TV, no one does it better than the Brits. I'm inclined to disagree with her, not from some overdeveloped sense of nationalism, but because British actors often cite American television as key in their formative TV experiences.

However, I might have to concede on one thing. When it comes to the beleaguered sitcom, Ricky Gervais might have saved it: first with The Office, and now with Extras, which premiered on HBO last week.

Actually, calling the original The Office and Extras "sitcoms" is a misnomer. A sitcom, in my mind, particularly the U.S. variety, has become something of a joke in itself. The humor is broad and not very complex, the punch lines so bombastic you could be watching with the sound off and still not miss the joke. Not so with Gervais' Extras. Here, he takes a turn from his earlier role as the painfully clueless David Brent to become aging aspiring actor Andy Millman, who's looking for his big break. Unlike David, Andy is clear on the ineptitude around him, and more in denial of his limited skills and abilities than idiotically naive. Lucky for us, because with that denial comes a bitter coating that makes Andy that much more empathetic than David.

In the extremely satisfying series premiere, Gervais' Andy can't even manage a walk-on without tripping. Instead of playing Andy's gaffe as a broad pratfall, the scene features Andy twisting his foot on a loose brick, which is both funny and painful. At the same time you're rolling your eyes at the idea that this actor can't manage a walk-on, you're still embarrassed for him. In short, Andy is more likable than David, but not by much. That he lies about his religious background simply to get into a woman's pants is shameful, but watching Gervais' pasty-faced prattling as he's called out on his lie is priceless, particularly as he is inappropriately dressed in a Saturday Night Fever suit (his woefully dated idea of cool) among a group of church ladies and the priest who has caught him in his lie.

Extras also features Stephen Merchant and Ashley Jensen. Each episode takes Andy on a new job, playing human wallpaper to the stars of the film (Kate Winslet, Patrick Stewart, and others in cameo roles). New episodes of Extras premiere on HBO Sundays at 9:30pm. Encores occur throughout the week. Check local listings.

Jennifer Perkins, proprietress of the Austin-based online jewelry vendor Naughty Secretary Club (www.naughtysecretaryclub.com), will host a new DIY series, Craft Lab. She spent all of September filming the daily show, featuring crafters and their projects from across the nation (yes, Austin makes an appearance). A premiere date is TBA.

Also on DIY: Season three of Knitty Gritty, hosted by Austin's knitting maven Vickie Howell, premieres Oct. 3. October is a busy month for Howell. In addition to filming 39 more Knitty Gritty episodes, her new book, New Knits on the Block, a guide to what kids really want (Sterling Books, $14.95), is about to hit the shelves. Local booksignings are in the works.

The Last (Honest) of the New Series Premieres