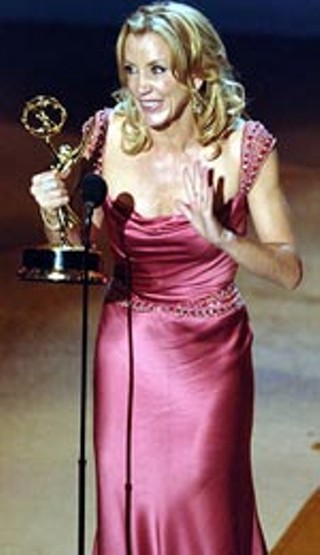 Yup. The Emmys were handed out last Sunday. As usual, there were hits, misses, and surprises. Here are a few of the highs and lows.

Best acceptance speech: A flabbergasted S. Epatha Merkerson (Law & Order) accepting for Outstanding Lead Actress in a Miniseries or Movie in Lackawanna Blues, who lost her thank-you notes in the bodice of her dress. Second-best, a thunderstruck Felicity Huffman (see below).

Best what-the-hell? moment: Patricia Arquette winning Outstanding Lead Actress in a Drama Series, over heavy hitters Glenn Close (The Shield; I said she would be the "hands down winner") and Frances Conroy from Six Feet Under. I like Arquette, but, um, huh?

Most disappointing wins: All the praise heaped on Everybody Loves Raymond, especially for Best Comedy Series, which should have gone to Arrested Development or Desperate Housewives. At least Ray Romano didn't win a Outstanding Lead Actor trophy. No, that went to Tony Shalhoub (Monk) again, ignoring the more deserving Jason Bateman (Arrested Development).

Most refreshingly honest expression of disappointment: Jessica Walter (Arrested Development), not for her loss, but for castmate Bateman. Seated behind him as the nominees were named, Walter's look went from anticipation to distaste.

Best display of being a good sport: Eva Longoria, as the butt of two gags pointing out she was the only core cast member of Desperate Housewives not nominated for Outstanding Lead Actress in a Comedy Series.

Sept. 23: Ghost Whisperer (CBS), 7pm. It's not like Medium, star Jennifer Love Hewitt insists. Her Melinda Gordon befriends the dead to help them get to the other side. Medium's Allison (Arquette) solves crimes with befuddling clues provided by the dead from the other side. Melinda has a best friend, the appealing Aisha Tyler (24). Patricia's best friend is her husband. Interesting, but all I really want to know is: When is Tyler going to get her own show?

Inconceivable (NBC), 9pm. A surprising amount of drama comes from this series set in an infertility clinic. Unfortunately, the drama is nearly washed out with a soapy love-hate relationship between clinic colleagues played by Ming-Na (ER) and Jonathan Cake (Empire).

Sept. 25: Desperate Housewives (ABC), 8pm. The ladies of Wisteria Lane return for a second saucy season. Personally, I'm looking forward to meeting the new neighbors played by Alfre Woodard as Betty Applewhite (what a great name!) and the breathtaking Mehcad Brooks as her son Matthew.

Grey's Anatomy (ABC), 9pm. You know, I liked the direction of the original pilot episode before they soaped it up with all the who's-sleeping-with-whom plotlines. All I really want to know is: When will Sandra Oh have her own show?

The West Wing (NBC), 7pm. The only-in-your-dreams presidential race is on, pitting fictional presidential candidates Matt Santos (Jimmy Smits) against Arnold Vinick (Alan Alda) for the leadership of the free world. The election itself occurs in March. Janeane Garofalo joins the series for an eight-episode run as a communications consultant. Note the move to Sunday night.

Sept. 27: Commander in Chief (ABC), 8pm. In the other world of your dreams, Geena Davis plays the first female president in U.S. history! Donald Sutherland co-stars as a slithering Speaker of the House Nathan Templeton.

Boston Legal (ABC), 9pm. Heather Locklear joins for two episodes. Julie Bowen (Ed) is new to the cast, while Monica Potter and Rhona Mitra are out.

Sept. 29: Night Stalker (ABC), 8pm. Yes, it's based on the original Night Stalker, only with a less rumpled, younger Carl Kolchak played by Stuart Townsend.

Alias (ABC), 9pm. Sydney's back! Is Vaughn (Michael Vartan)? What's his real name? Lena Olin returns this season, but Nadia and Weiss' (Mia Maestro and Greg Grunberg) roles are reduced. Maybe that means we get to see what happens between the blindingly hot Dixon (Carl Lumbly) and CIA Director Hayden Chase (Angela Bassett).