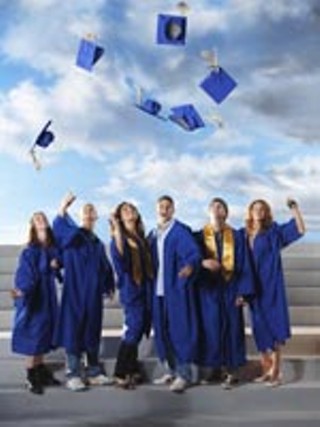 People come and go so quickly in The OC!

Not to worry: Ryan, Marissa, Summer, and Seth, along with alpha parents Sandy and Kirsten, plus widow, born-again mom, and uber-bitch Julie Cooper-Nichol are all returning for the season premiere of The OC.

It's been a long summer for The OC fans, wondering what's in store for our fabulous foursome now that they have reached their senior year at Harbor High. Oh, and there's that unfinished business of who shot Trey. Actually, we know who shot Trey. The question is, who's going down for it? I'm not going to tell. I will say I think this honkingly huge plot twist could have had more time devoted to it. However, The OC has never been content to follow the lead of other prime-time soaps. That's part of its appeal, along with the zippy dialogue, unique characters (Seth), characters that can't help but be gosh-darn good (Sandy, Kirsten), flawed but lovable characters (Summer, Jimmy), and characters who are deliciously bad (Julie Cooper-Nichol).

Speaking of delicious, Jeri Ryan joins the cast as Charlotte, a recovering alcoholic in the plush rehab where we find Kirsten at the beginning of the new season. Charlotte seems friendly enough, but there's a mysterious shadow side to her that Ryan plays well. Will Charlotte be Kirsten's Oliver (the guy Marissa met the year she went to counseling – sure are a lot of drunks on this show – who turned out to be obsessed with her)? Is Charlotte another unknown Nichol daughter (like darling Lindsey)? Or, is some other unknown plan lurking under Charlotte's lingering glances at Kirsten? Those are the tantalizing questions to ponder at the end of the first episode of the new season. Also, will Jimmy and Julie really be able to make a second go at their marriage? The twosome reunited last season. Conveniently, Julie is now a widow, and the worry of their darling Marissa potentially facing jail time has brought them closer. Can love – or Julie's fat inheritance – keep them together?

Now, I'll be the first to admit that The OC has no redeeming social value. So, shoot me, all you "I don't watch TV" snobs, or those who claim the BBC is the only source of "quality" TV. To the former, I say "Liar, liar." If you have a TV, you watch something. To the latter, I say, watch The OC and pretend the characters are speaking with British accents, then maybe you'll get it. The truth is, The OC is an enjoyable, funny, smartly executed prime-time soap that works because it doesn't take itself so seriously. Such is not the case with knockoffs trying to re-create The OC mojo.

There is no shortage of The OC wannabes. Summerland on the WB comes to mind. Another is the new Fox series Reunion. There are many intriguing elements to this new series. Part soap, part mystery, the series begins with the funeral of a friend, presumably one of the six we meet in long flashbacks to the summer of 1986 after the group has graduated from high school. In 1986, we learn about each of the characters, their intertwined melodramas, and the key moments in that fateful summer that defines their future. In the present, we learn that the deceased may have been murdered, but by whom and why? That's the mystery that is sure to suck in some viewers. I have to admit, I'm intrigued by this element of the show, as well. But I'm left cold by the uniformly weak performances – except for Amanda Righetti (The OC's recurring Hailey), who manages to bring life to Reunion's otherwise bland dialogue. The divine Mathew St. Patrick (Six Feet Under) stars as Detective Marjorino, investigating the death of the deceased. Unfortunately, it appears his role serves no other purpose than to crank each episode's narrative wheel. What a waste. But Reunion is a mystery. Perhaps his role will become meatier as the series drones on, er, progresses.

I suspect Reunion will appeal to the demographic it appears to be aiming for, particularly since all of the adults (i.e., parents) are no more developed than the Wah-Wah voices of adults in a Peanuts cartoon. It's a choice, of course, but not one that keeps me interested. What would The OC's Ryan, Seth, Marissa, and Summer be without Sandy, Kirsten, Julie, or Jimmy? If only The OC wannabes would answer this question for themselves.

The third season premiere of The OC is Thursday, Sept. 8, at 7pm. The series premiere of Reunion follows at 8pm, both on Fox.