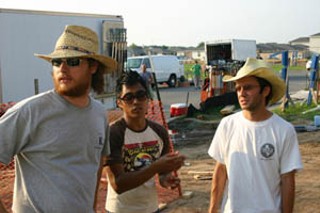 Jennifer Rische won't have to attend to any actors' hair for a while, and the scene she's excited about, the one with the fake blood, is still a long way off. "What day is it?" she absently asks Jessica Ehimika from the make-up department.

"Yeah I know that," says Rische, "but I mean is it Sunday this week or Sunday last week?"

Hold a beat as Ehimika arches an eyebrow, and then they both burst into laughter. Near the end of week two, which began by getting half a day behind schedule and continues under scorching sun, The Cassidy Kids shoot has fully attained alternate reality. To anyone who's worked on a feature, discovering you live on planet Film Shoot is no surprise, but it still takes effort to keep up with the calendar and events of the home world. A newspaper reporter, for instance, however much he may be a tourist or irritant, is also an emissary from Earth, likely to spend as much time taking notes as providing updates on Karl Rove and Robert Novak or relating Michael Bay's latest not-mea-culpas for The Island's dismal box office.

"In the dream, we get to the end of this week," director Jake Vaughan explains, "and I realize I'm signed up for one of those 48-hour film fests at the Alamo. Like, I'm using my time off from this movie to make another movie, and I'm going, 'What was I thinking?!'"

As it happens, producer and co-writer Bryan Poyser relates having had more or less the same nightmare, but from a slightly different angle. "Yeah, so we've finished our day, and we're all ready for a day off, but Jake just won't wrap. He keeps making up more shots, and I can't stop him. Nobody can stop him! He's a maniac."

Producer Megan Gilbride chuckles at this. "He said he wouldn't let it happen, but our little Bryan is becoming a producer. I'm so proud!" Not that she isn't in the same boat. "I can't say on this job I'm not the kid who's still learning. [UT Film Institute] has taken on a real challenge here, with a crew of about 50 with half professional and half interns, but I'm just always knocked on my ass by how smart and capable people are and how they rise to the occasion."

One afternoon, a family arrives at a house two doors down with a loud truck and a jam-packed trailer. The move-in is bound to make some noise, and take some time doing it. Many productions would simply ask the family to be as quiet as possible, or suggest they stop unloading their trailer every time the camera rolls, and it would be no surprise if the film people were rude about it. If planet Film Shoot is at a remove from reality, it's also often solipsistic and lacking in courtesy. But shooting continues without delay or inconvenience to the neighbors as a few grips and production assistants leap up into the trailer to help unload as quietly and quickly as possible.

Of course some difficulties are less amenable to positive attitudes and cheerful cooperation; the tight schedule provokes its own night terrors, so the idea of shooting extra during off-time could also be seen as a form of wishful thinking. Each day of the last week of shooting, for instance, will require covering nearly twice as many script pages as have been the daily average so far, and it's not certain whether switching from 16mm to HD will speed things up. But as steep as the learning curve is on this shoot for the director and producers on down, the mixture of students and professionals of widely varying experience has posed virtually no problems in itself. Most everything can be chalked up to the Murphy's Law of any low-budget production. Looking around this set, one simply finds a solid crew who deserve to be kept employed on more productions in Austin.

After making up the half-day delay, the week ends on a night shoot, bringing lower temperatures, higher spirits, and the blood effects Jennifer Rische has been waiting for. Still, it's nearly 4am, and there's a shot left to be done that requires an entirely new lighting setup. It's quickly determined that it can wait till the end of another shooting day, and that an actor involved need not come back, since an intern can easily play his wrapped-up body deposited into the trunk of a car. Sound recordist Chris Keyland asks if he can pick up some gurgling noises from the corpse-to-be, and Vaughan shakes his head no. Assistant Director Meg Beatty sees this and calls a wrap for the day. Suddenly Vaughan calls out, "No, Meg! We need that gurgling sound." But before anyone's expression can turn from surprise to anger or déjà vu, he smiles. "Kidding."