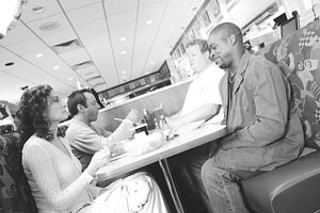 There's nothing like contemporary television to remind us how miserable we are. The driving conceit behind most makeover reality shows using cosmetic surgery is how much sweeter life will be once the slicing and dicing are complete, the bandages are removed, and the right hair, make-up, and clothes are purchased. Perhaps it's just too messy to delve into the psychic scars that come with knowing you're just not good enough as you are and need to score some invasive surgery to correct what nature cheated you of.

Which is why I was intrigued with the title of the new FX series, Starved, which premiered last week. The title alone is provocative. As any armchair psychologist will tell you, compulsions of any sort are rooted in something other than the item of one's fixation. As the title of the new FX series implies, there is something lacking, something starved for – but what? That's the story I was wanting to hear, handled off of Oprah's couch. I had hopes that Starved would try to tell this story. Unfortunately, it doesn't hit the mark. It doesn't even come close.

Starved features a quartet of friends who each have an eating disorder (the friends are played by such an unmemorable cast I can barely muster the interest to find their names). Sam (Eric Schaeffer) relieves his sudden surges of inadequacy with chocolate cake. Billie (Laura Benanti) has overcome her anorexia but replaced it with sex. Dan (Del Pentecost) is the compulsive over-eater who would rather get intimate with a box of donuts than his wife, while Adam (Sterling K. Brown) is a buff and bulimic police officer. Not traditional sitcom fare, to be sure, but one that a little black humor could deal with while delving deeper into the human condition of these similar but varied characters. So much for that. Any hopes of watching a sophisticated comedy are quickly dashed within the first 10 minutes of the series. Instead of digging deeper, the series relies on cheap gags and even cheaper attempts at finding the dark humor in this deadly serious subject. It's too bad, because getting to the root of just what it is Americans are starved for is not addressed in most makeover shows. As long as the exterior looks good, we're led to believe, all the internal dramas will evaporate.

Which brings me to another sitcom, this one set to air on NBC this fall. Thick and Thin – again with a perplexingly unmemorable cast – features Jessica Capshaw as Mary, a formerly fat woman who is newly thin, yet, bewildered with the unearned privileges that come with her new body. She's a fat woman trapped in a thin woman's body. This could be rich fodder. Unfortunately, the series misses the deeper emotional mark, relying on bland writing and even less inspired performances (save for Sharon Gless and Martin Mull, whose talents are wasted). As a caveat, I am remarking on an early screener of the series, meaning that all kinds of changes could occur between now and its premiere date (new casting, new writers, etc). However, Thick and Thin bears mentioning along with Starved, given its attempt to plumb America's obsession with seeking outside fixes (food, surgery) in lieu of doing the psychological, spiritual, and emotional work that is much harder to face. And since doing this work is more time-consuming than finding comfort in a box of Krispy Kremes, this subject could be sustained for a long time. If only someone could hit the mark with precision, candor, and – why not? – humor. I still have faith.

Starved airs on FX throughout the week. Thick and Thin is scheduled to premiere on NBC this fall. Check local listings.