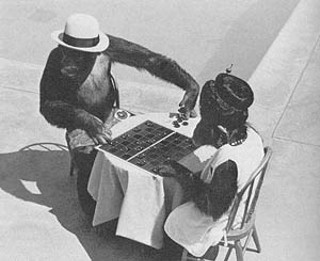 When Chronicle Managing Editor Cindy Widner wrote about the Texas Monkey Project a couple of weeks back (for more from her on the subject, see p.38), she struck on an enduring truth.

"There's just something about monkeys, it seems, that make people want to encounter them, or images of them, in almost any format."

One of those formats is TV.

Think about all those times a monkey, either au naturel or dressed in human attire, has been brought in to punch up an old sitcom. Elly Mae Clampett on The Beverly Hillbillies had a monkey hanging from her trim waste from time to time. I haven't done any hard research, but I would wager a monkey was only one of the creatures Darrin Stephens of Bewitched was turned into. On late night talk, Johnny Carson (and recently Letterman and Leno) allowed himself to play straight man to a non-human primate and other four-legged creatures. Lately, the monkey has become ubiquitous in animated TV fare, from the sweet and helpful Boots on Dora the Explorer to the maniacal Mojo Jojo on The Powerpuff Girls. On Cartoon Network's Adult Swim, Sealab 2021 recently featured a lab monkey whose brain was exposed and two Frankenstein plugs poked into his gray matter. It's funnier than it sounds, especially since the monkey got his revenge at the end of the episode, manipulating all the human scientists by turning them into half-human, half-fish creatures and making them perform in undignified ways – or blowing them up. There was something naturally amusing (and in this particular case, kind of sick) about a near-human primate, even an animated one, gesticulating and screeching as he runs amok with power, punishing his former scientist tormentors.

Perhaps the most recent case of a monkey with an extended gig in a supporting role was Marcel on Friends. The spider monkey was a multiepisode sidekick for Ross. Or maybe it was the other way around. Alas, Marcel was written out of the show amid rumors that the petite primate had developed a diva complex. In reality, the spider monkey had probably reached puberty, a time when they become naturally combative, a trait that serves them in the wild but not on a Hollywood soundstage.

But chimps and monkeys are not always relegated to supporting roles. Who remembers Lancelot Link, Secret Chimp (1970-1972)? Loosely patterned after Get Smart (1965-1970), this live action family series featured chimps acting as humans. Lancelot was a secret agent whose cover job was as a member of the Evolution Revolution Band. However, his real persona was as a secret agent, fighting crime for APE (Agency to Prevent Evil) in their ongoing battle against CHUMP (think Get Smart's CONTROL vs. KAOS). Don't remember Lancelot Link? Neither do I. However, there is something of a small cult following for this short series (check out www.70slivekidvid.com/lancelot.htm), which is now available on DVD and VHS. Cultists are also fond of referencing the 1999 short documentary "I Created Lancelot Link" (D: Diane Bernard, Jeff Krulik), which I would love to see, perhaps more so than the original series. The description for "I Created ..." sounds half crackpot, half endearing – which, as a Buffy the Vampire Slayer fan, I can appreciate on so many levels.

Lancelot Link is not the only series featuring non-human primates. At the start of my tenure as "TV Eye," I remember another very short-lived live-action series featuring chimps and monkeys dressed as humans. Does anyone recall this series? Are there other series besides Lancelot Link that I'm not aware of? My curiosity is piqued, which brings me to the big question: Is it time for an all chimp and monkey network, albeit one without the abuse that is "training" actual wild animals to act? As always, stay tuned.

TV at the Alamo

Ren & Stimpy creator John Kricfalusi comes to the Alamo Drafthouse Downtown Aug. 13. Rare Ren & Stimpy shorts and "other surprises" are promised, according to the Alamo folks. Get your tickets online at www.drafthouse.com.