Norman Tempia of Animated FX Inc., along with his partner Dave Nelson, made a nearly believable chimp suit for the 1995 movie Ed. So we called to see what's up his tree. Austin Chronicle: How did you get started in chimp suits?

Norman Tempia: When I got out of art school, I worked as a staff designer at the Muppets for 10 years. … There was a film, Ed, back in 1995, and they were looking around for companies to make chipmanzee make-up, and they liked ours the best, so we got the job.

AC: So, that was the first chimp suit you made?

NT: Yeah, the first and the only. We thought when we made it, it came out really well. We had even showed it to Rick Baker, and he praised it. I think that it's the best chimp suit around.

AC: And it was a girl gymnast in the suit?

NT: Her name is Denise Cheshire. And we chose her because her height was perfect, she was small-boned, and had a really shallow eye orbit. And, because she's female, she had small hands and feet and shoulders. Basically, you have to hide a human body inside the chimp suit.

AC: Were you on set?

NT: We were on set for 10 weeks. We would make up her eyes and she would have on these chimpanzee scleral contact lenses that are about the size of a quarter and can be very painful. So the chimp had these really great, realistic eyes. The head has about 16 little servos inside, so it's all self-contained, and those are controlled by radio control. It's pretty elaborate. The hair I chose to put on the chimp is human hair, and a lot of it. And it's all hand-tied on spandex and ventilated into the face.

AC: What's the percentage of people who think it's real? 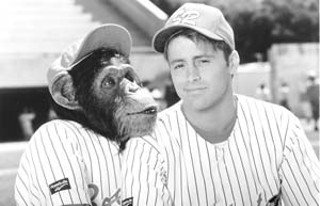 AC: When you look at it do you think it's real? Do you think, "I'm pulling this off"?

NT: Oh yeah, definitely. Except the one technique that I've always wanted to do with it that I've not been able to do is shoot it against a blue screen and composite it in a lot smaller. That would fool everybody. That would fool 100 percent of the people.

NT: Oh, yeah. Thing is, people are used to seeing little chimps, because the way it works with live chimpanzees is that they are performing until they are 7 years old, and then essentially they become teenagers, and they are hard to work with. So at the age of 7, which is still a small, juvenile chimpanzee, they are put away until they are 14, and afterward they are basically geriatric chimps and they become passive again. So, people aren't used to seeing big chimps in films.

NT: We're up against that all the time. They've gotten better at rendering hair, but I'd put a chimp suit like ours against any computer graphic chimp. … Plus, you have a human performer in there; the director can actually direct it in action and watch it in dailies, and you really know what you're getting.

NT: John Alexander. We would have used him, but his body proportions are too big. He's great. He was one of the gorillas in Greystoke. He was in Congo. He was Mighty Joe Young. He's been in a ton of suits, and he's really good.

AC: Did he go to some kind of school for that?

NT: No, he started out as a mime. He's just good at movement, he's really physically fit, which is a big requirement of having someone in a suit. He's also got the disposition to be in a suit. It can be really grueling because you're in the thing for hours.

NT: I would say it's Mighty Joe Young. That's Rick Baker, who's the master of it. He's the premier gorilla-suit guy. I think he has at least six Oscars for make-up effects.

NT: There's a person in the suit and two external people to actually puppeteer the face – it takes a team of three to four performers. There was a shot in Ed where the chimp is sitting on a table signing autographs. Denise's legs were under the table, with a pair of fake legs on the table, and we had another puppeteer pick things up with the feet, and that really gives the illusion that there's not a person inside. Once you do an establishing shot like that, the audience accepts it for the run of the picture. 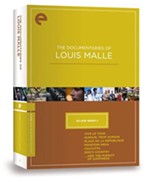 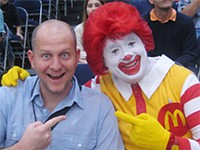