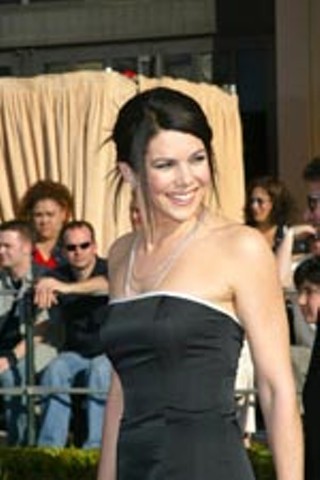 It's Emmy season! With it comes the exasperated "what the ... ?" when perusing this year's nominations. I was glad to finally see some overlooked TV series recognized by Emmy voters. Yet, there are still some head-scratching omissions. Let's start where it all begins, with the writing nominations:

Outstanding Writing for a Comedy Series: Barbie Adler, Brad Copeland, Jim Valley, and series creator Mitchell Hurwitz from Arrested Development have three scripts nominated, which should bode well for someone in that camp. However, I think Marc Cherry, nominated for his pilot script for Desperate Housewives, should get a special commendation for helping bring a renewed sense of hope to TV comedy. Actually, the Hurwitz camp did it the year before with Arrested Development. But alas, it wasn't as widely watched as those DH hoochie mamas. The last nominee in this category is Ray Romano and his crew for the finale of Everybody Loves Raymond. Omissions: still no love for the crisp and literate work of Amy Sherman-Palladino et al., writing for the WB's The Gilmore Girls or any of the scribes from Scrubs, which – at long last – showed up among the Outstanding Comedy Series nominees.

Outstanding Writing for a Drama Series: Lost creator J.J. Abrams (also of Alias), along with Damon Lindelof, Jeffrey Lieber, and David Fury are nominated for the series' pilot and Fury's "Walkabout." Two nominations in the ring bode well for Lost. However, my personal favorite is Peter Tolan and Denis Leary's pilot for the underappreciated Rescue Me (FX). Other nominations include The Wire (HBO) writers George Pelecanos and David Simon for "Middle Ground," and David Shore's "Three Stories" for House (Fox).

Consternation sets in with the outstanding series nominations. For comedies, the well-deserving Arrested Development (last year's winner) is included, as are Desperate Housewives and Scrubs. But Will & Grace? The inclusion of Everybody Loves Raymond is a sentimental nod, of course. Omissions: Gilmore Girls, Entourage (HBO), and Reno 911! (Comedy Central). If there were an award for sheer charm, it would go to the now canceled Kevin Hill (UPN), and one for smart and sassy, Veronica Mars (UPN). Also MIA is the woefully short-lived Wonderfalls.

Outstanding Drama Series: It probably shows my bias, but it never makes sense to me when a series nominated for being "the best" in a category has no writing nominations. The only series nominated for Outstanding Drama with a writing nomination is Lost. Others include the overhyped Deadwood (HBO), Six Feet Under (HBO), 24 (Fox), and the notably improved The West Wing (NBC). Missing are Rescue Me, the quirky Boston Legal, and (thankfully) all of the CSIs and Law & Orders.

Outstanding Lead Actor in a Comedy Series: A loud "yes!" for Jason Bateman as Michael Bluth in Arrested Development and Zach Braff as John "J.D." Dorian in Scrubs. Yawns to Ray Romano and Eric McCormack as Will Truman in Will & Grace. Tony Shalhoub is outstanding as Monk, but the show itself is pedestrian. Missing is the enormously charming Taye Diggs as Kevin Hill.

Outstanding Lead Actress in a Comedy: Felicity Huffman's Lynette Scavo of Desperate Housewives effortlessly balances laughs with desperation. DH colleagues Teri Hatcher and Marcia Cross are also nominated in this category, though their performances – however pitch-perfect – are one-note wonders. Speaking of singing one-note, co-nominees Patricia Heaton from Raymond and Jane Kaczmarek of Malcolm in the Middle (Fox) have squeezed the last bit of air out of theirs. Still no love for Gilmore Girls' Lauren Graham. Caroline Dhavernas as Jaye Tyler in the now forgotten Wonderfalls is worthy of recognition here. And I know it's just a prime-time soap, but The OC's (Fox) deliciously bitchy Melinda Clarke as Julie Cooper-Nichol should get a nod here.

Outstanding Lead Actress in a Drama Series: Love Jennifer Garner's Sydney Bristow on Alias, Patricia Arquette's Allison Dubois on newcomer Medium (NBC), and the always fine Frances Conroy as Ruth Fisher on Six Feet Under. But the hands down winner in this category is Glenn Close as Capt. Monica Rawling on The Shield (FX). Also nominated is Mariska Hargitay as Detective Olivia Benson on Law & Order: SVU. I would have loved to have seen Kristen Bell, star of Veronica Mars, nominated here.

The 57th Annual Primetime Emmy Awards will be presented Sept. 18 on CBS.