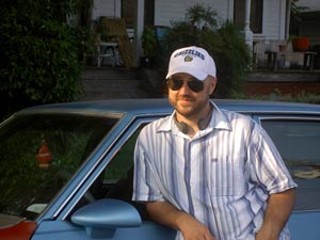 Big Daddy Kane said it best: Pimpin' ain't easy. But director Craig Brewer at least makes it look real. Brewer's sophomore effort, Hustle & Flow, marries the director's gritty hometown of Memphis to Terrence Dashon Howard's DJay, a bottom-rung hustler with sketchy dreams of becoming a rap star like local hero Skinny Black (Ludacris). Alongside the quiet desperation of his women Nola (Taryn Manning of 8 Mile), Shug (Taraji P. Henson), and Lexus (Paula Jai Parker), DJay's midlife crisis could easily have been played for laughs, or worse, melodrama, but Brewer's skillful scriptwork and some serious behind-the-lens talent make Hustle & Flow not only memorable, but moving, as well, and winner of the Audience and Cinematography awards at this year's Sundance Film Festival. The Chronicle spoke to Brewer in the week leading up to his film's release about where he's been, where he's going, and why the most popular of Tinseltown truisms is as reliable as a two-legged dog.

Austin Chronicle: How did your appreciation of hip-hop segue into the making of Hustle & Flow? Did you go to film school at some point?

Craig Brewer: I had completed one film, called The Poor & Hungry, which debuted in Austin at the Austin Film Festival back in 2000. Austin, by the way, has a very interesting relation to Hustle & Flow because as I was driving down to go to the AFF, I began carding – that's like film outline with different scenes written on index cards – Hustle & Flow. So, Hustle & Flow is essentially the story of me and my wife trying to make The Poor & Hungry. My father and I were very close, and he produced the plays that I would write while I was in high school, even though he was in shipping and had nothing to do with theatre or film. When he read the script for The Poor & Hungry, he told me I should shoot it on video, on DV – and this is before The Blair Witch Project and all that – and then died suddenly. In fact, he died that same day. And the last thing he told me was "Don't apologize for not having money, celebrate it." And so, with the $20,000 of inheritance that I got from my dad's passing, I went out and bought a DV camera and some equipment and began to learn the specifics of how to shoot a film. And that was my film school.

AC: When did John Singleton come on board Hustle & Flow?

CB: I went around Hollywood for a year to two years with my producer Stephanie Allain, and every studio either said no or "Don't cast Terrence Howard," or "Craig, you can't do it because you're white." And finally Stephanie decided that since I'd made a good movie for 20 grand, then maybe I could do a good one for 500 grand. So she sold her house and put up half of that. Stephanie, by the way, gave Singleton his start when she was at Columbia – she green-lighted Boyz-N-the Hood – and sent the Hustle & Flow script to him to see if he would maybe come in on the other half of financing. Turns out he thought the script was great and said "Let's do it for $10 million. You just need me in the room." And so we went to every studio again, with Singleton with us, and they still all said no. I think that pissed John off, that made him feel they were disrespecting him, personally, because here he had just made $300 million for Universal Studios on 2 Fast 2 Furious. ... And no one would even give $4 million to make Hustle & Flow, even though we already had Ludacris and Anthony Anderson attached. And rightly, John felt insulted. He ended up putting his house up for collateral and financed the film himself.

The prevailing myth in Hollywood is that if you make a big movie that makes lots of money, then the studios will let you do whatever you want. And that's just bullshit.

That's why I get pissed off when people say [about Hustle & Flow] that I'm doing a stereotype. Bullshit! I fought Hollywood not to do a stereotype! I could have gotten this movie green-lit a lot sooner if I'd just made fun of the pimp character, or if I got Chris Tucker to play him in silks and Kangols. But I really wanted to represent these people that I know, the hustlers that're moving girls from shake joint to shake joint.

Hustle & Flow opens in Austin on Friday, July 22. For a review and show times, see Film Listings. For the extended transcript of Marc Savlov's interview with Craig Brewer, see the sidebar "Flowing Over" below.